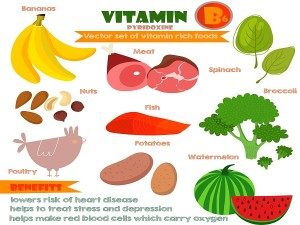 Vitamin B6 is one of the nine water soluble B vitamins. It is also known as pyridoxine (3-hydroxy-4, 5-dihydroxy-methyl-2-methylpyridine). Pyridoxal-5’-phosphate (PLP) is the coenzyme form of this vitamin that plays a vital role in more than 100 enzymatic reactions involved in amino acid and protein synthesis as well as fatty acids and carbohydrates metabolism (1–2).

In 1930, Peters and colleagues first reported “rat acrodynia”, a disease where rats suffer from severe skin injury. Four years later in 1934, Gyorgy discovered vitamin B6 as an effective factor to treat this disease (3–4).Thereafter it was isolated in crystalline form by Lepkovsky in 1938 (5). In the following year, Harris and Folkers, and Kuhn and his associates separately showed vitamin B6 as a pyridine derivative (6,7,8).

The structure of vitamin B6 (pyridoxine and PLP) are given below:

WHO ARE AT RISK FOR VITAMIN B6 DEFICIENCY

DEFICIENCY OF VITAMIN B6

Although vitamin B6 is a water-soluble vitamin and is excreted in the urine, long-term supplementation with high doses of pyridoxine (> 1000mg/day) may cause sensory neuropathy, a condition characterized by pain and numbness of the extremities followed by difficulty in walking (16–19). Gastrointestinal symptoms such as nausea and heart burn are also reported due to excessive vitamin B6 intake (16). To prevent supplementation overdose, the Food and Nutrition Board of the Institute of Medicine has set the tolerable upper intake level for pyridoxine at 100 mg/day for adults 9.

VITAMIN B6 AND HEALTH

Nausea and Vomiting in Pregnancy

About half of the pregnant women experience “morning sickness” characterized by frequent occurrence of nausea and vomiting in the first few months of pregnancy [20–21]. This condition usually lasts throughout the day and can disrupt a woman’s daily functioning. Vitamin B6 at a dose of 10–25 mg three or four times a day is recommended by American Congress of Obstetrics and Gynecology (ACOG) to treat this condition [22].

An association between vitamin B6 and better memory test scores in men aged 54–81 years was reported before [23].Moreover, a systematic review of 14 randomized controlled trials found insufficient evidence of an effect of vitamin B6 supplements alone or with vitamin B12 and folic acid on cognitive function in people with normal cognitive function [24].

A recent placebo-controlled trial found that a daily B-vitamin supplementation (B12, B6 and folic acid) that led to significant homocysteine lowering in high-risk elderly individuals could limit the progressive atrophy of gray matter brain regions associated with the Alzheimer’s disease (25). Because of mixed findings, more research is needed to see whether vitamin B supplements may blunt cognitive decline in elderly people.

Premenstrual syndrome (PMS) are symptoms, including but not limited to fatigue, irritability, moodiness/depression, fluid retention, and breast tenderness. PMS appears after ovulation and go down with the onset of menstruation. A meta-analysis of nine published

trials involving almost 1,000 women with PMS found that vitamin B6 at doses up to 100 mg/day are likely to be beneficial in treating premenstrual symptoms and premenstrual depression. However most of the studies analyzed were small and several had methodological weaknesses [29]. Another study showed that 80 mg pyridoxine taken daily over the course of three cycles was associated with statistically significant reductions in a broad range of PMS symptoms, [30]. The effectiveness of vitamin B6 in removing the mood-related symptoms of PMS could be due to its role as a coenzyme in neurotransmitter (i.e. GABA, serotonin etc) synthesis [31]. More research is needed to draw any conclusive role of vitamin B6 in alleviating PMS.

(Estrogen in pills may interfere with vitamin B6 metabolism)

Long term use of NSAIDs (nonsteroidal

Tuberculosis Reduce bioavailability of B6

Parkinson’s disease Reduce bioavailability of B6

Moreover, large doses of vitamin B6 decrease the efficacy of two anticonvulsants, phenobarbital and phenytoin, and of L-Dopa [34, 19].

Food Cravings and Pica; An Overview

By Joanne P. Shelby-Klein BSN RN How many times have you made the comment…

By Perry McLimore, MD., JD. Introduction Gluten is a protein found in grassy grains such…

One Response to "Vitamin B6"