Iron – Essential Mineral for your Health 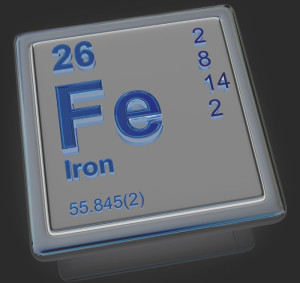 Iron is an essential mineral or micronutrient that plays versatile roles in the human body. It is a metal denoted by molecular symbol ‘Fe’, that is mostly available in either of two different chemical states, i.e, ferrous or ferric form. Iron is a major component of hemoglobin in the red blood cell, and also is an important factor for cell differentiation and several vital enzymatic reactions.

Humans receive iron from the diet or iron supplement pills. In some medical conditions related to iron deficiency, iron can be obtained through intravenous injection or blood transfusion.

Heme iron means iron in a heme complex, as found in the hemoglobin of red blood cell, or in the myoglobin protein of animal tissues. Animal based food products contain both heme and non-heme iron. About 40% of the iron in the meat, fish and poultry belongs to heme iron, another 55-60% is non-heme iron.1 Iron present in the plant based dietary products is mostly non-heme iron.

Hemoglobin is a protein molecule that constitutes of a heme iron and four globulin protein chains. Hemoglobin carries oxygen (O2) to tissues and returns carbon dioxide (CO2) from tissues to the lungs through the blood.

Seventy percent of the iron in a human body is found in hemoglobin, and it is also because of the hemoglobin that the blood has its red color. Iron is also present in several other proteins that are involved in crucial enzymatic functions.

Iron storage, metabolism and transport in the body are regulated by several factors including the activity of a special enzyme called hepcidin.2 As previously mentioned, 70% of the iron in human is found in the red blood cell in the form of hemoglobin. Ferritin is a protein that stores iron in tissues and in blood serum.

Hence serum ferritin level is directly related to the stored iron level in the body. About 25% of the body’s iron is stored in the ferritin, with a cut off point of 300-360 microgram/DL.3 When the accumulated iron exceeds the storage capacity of ferritin, it forms a complex called hemociderin.

Hemociderin remains inside the cells as opposed to circulating in blood, and it is less effective in supplying iron compared to ferritin. Excessive accumulation of hemociderin may cause organ damage. Apart from blood, iron is stored in the liver cells, spleen, and bone marrow in our body.

Normally, a substantial amount of absorbed iron is excreted from the body through feces, and also a trace amount is excreted through urine, sweat or dead cell exfoliation.

There is a genetic disorder called hemochromatosis that also leads to excessive iron load in the joints and vital organs like heart, liver, pancreas, and pituitary gland. This excessive iron cannot flush out of the body itself. If not removed medically, it may give rise to serious pathological conditions.

According to World Health Organization (WHO) Hemoglobin level cut off points in the blood are 130 g/L (13 g/DL) for men, 120 g/L (12g/DL) for non-pregnant women, and 110 g/L (11g/DL) for pregnant women.4 Hemoglobin concentration is measured to diagnose iron-deficiency anemia, a common medical condition where the number of red blood cell is insufficient, hence hemoglobin level is also lower than the designated cut off point. Low hemoglobin production results in depletion of oxygen supply.

Normally a minimal amount of iron is lost from a healthy human body in several ways, such as through sweating, urination, defecation, or exfoliation of old skin cells, however it does not cause iron deficiency anemia. Rather, underlying causes of iron deficiency anemia could range from worm infection, malnutrition to iron loss during menstruation bleeding in women.

Typical symptoms of anemia include pale skin, weakness, fatigue, rapid heart beats, shortness of breath, dizziness, cold hand and feet, brittleness of nails, leg cramp, and insomnia. Iron is important for muscle contraction; therefore muscle tone and elasticity is lost without proper supply for iron. Adequate amount of iron intake through diet or supplements can give relief from these physical ailments.

Mild to moderate anemia can be treated with daily iron supplementation in the form of iron salts, such as iron sulfate, iron fumarate or polimaltose iron complex 3 (see table 1. for daily allowances of iron for different age groups) . In more serious medical conditions, iron injections or blood transfusion are often the mode of clinical interventions.

TABLE 1. DIETARY ALLOWANCES (RDAS) FOR IRON, AS RECOMMENDED BY NIH

REQUIREMENT OF IRON FOR GROWTH AND DEVELOPMENT OF CHILDREN

High level of iron is required during growth and development. Breast milk contains iron, however the amount is not sufficient to meet the daily iron requirement of an infant older than 4-6 months.6 So breastfed infants should be given some oral iron supplements (1mg/kg body weight per day), starting after 4 months of age until the age when they can take iron directly from fortified foods.6

However, it is recommended to consult your pediatrician to assure the suitability of an iron supplement before introducing it to your child. Toddlers or children may develop iron deficiency anemia if iron absorption from their diet is not adequate to accommodate their increasing need for iron supply during their growing age. Proper iron supply is believed to pace up brain development and motor coordination (movement of body parts or limbs) in developing children.

Some scientific studies reported that iron deficiency in toddlers might lead to psychological effects or even social withdrawal.6

Iron deficiency in pregnancy is a high risk factor since it may lead to consequences like premature birth, low birth-weight of the infant, low iron stores, and impaired cognitive and behavioral development.7, 8 Maternal factors such as gestational diabetes, anemia, or maternal hypertension with growth restriction may hinder iron supply to the fetus.

A survey by World Health Organization revealed an alarming fact, that between the years of 1993 and 2005, 42% of women worldwide suffered from anemia during their pregnancies. Iron supplements are needed not only during pregnancy, but also after childbirth, or even after a miscarriage to compensate the depleted iron.

OTHER GROUPS OF PEOPLE WITH HIGH RISK OF IRON DEFICIENCY

Apart from pregnant and lactation women or growing children, there are other people who might bear high risk of iron deficiency. Frequent blood donors, patients with cancer or heart failure or gastrointestinal disorders9 may suffer from iron deficiency due to mal-absorption.8

WHERE DO WE GET IRON FOR OUR BODY?

We do not synthesize iron in our body. A normal healthy human being must obtain iron from dietary sources and/or from iron supplements. Cereal, legume, lentil, beans, tofu, dry fruits, meat & poultry, fish, green and leafy vegetables are enriched in irons. (See the table 2. for amount of iron present in different food ingredients). Infant formulas are generally fortified with iron in the US.

Note: Table 2. was adapted from ods.od.nih.gov/factsheets. *DV or Daily Value is a measure developed by US Food and Drug Administration (FDA) to help consumer compare nutrient contents of products in the context of a standard daily diet.

In emergency medical conditions with low iron supply, the immediate need for iron in the body is met by iron injections or blood transfusion.

For average people, 20%-25% of the consumed heme iron is actually absorbed in the body. Many substances including, caffeine, eggs, dairy products such as milk, cheese and yogurt, and other calcium containing food products interfere with non-heme iron absorption in the gut.

Though calcium, zinc and manganese are essential minerals themselves, they interfere with iron absorption as well. To avoid this interference with iron absorption, it is recommended not to consume these dietary products or supplements and iron-enriched food or with an iron pill at the same time of a day.

Same warning is applicable regarding consumption of tea, coffee, and oregano (a herb), phytates (found in soy) while taking an iron rich/fortified food with an intention to increase iron levels in the body. The good news is that vitamin C increases iron absorption from other food.

INTERACTION OF IRON WITH DIFFERENT MEDICATIONS

Also maintaining a substantial time gap between intake of a potentially interfering drug and an iron supplement may help reduce the interference. Following are examples of some common drugs that are known to interfere with iron absorption 10 or the drugs whose absorptions are interfered by iron intake.

orally administered iron supplement in the form of ferrous sulfate reduces absorption of the drug methyldopa and levodopa in the intestine.12

Iron intake reduces absorption of orally administered levothyroxine, a medicine that is used to treat hypothyroidism.13

Iron intake impairs absorption of the antibiotic tetracycline and its derivative oxytetracycline, methacycline, and doxycycline.14

Gastric acid plays an important role in the absorption of iron from the diet. Medicines with proton pump inhibitors, such as lansoprazole and omeprazole, reduce the acidity of stomach; hence they reduce iron absorption as well.8

Birth control medications may increase iron level.15 Therefore taking an oral contraceptive and an iron supplement or iron containing multivitamin at the same time of a day may run the risk of excessive iron accumulation in the body.

While taking iron supplement one must consult his or her healthcare provider regarding appropriate dosage since excessive iron intake may lead to complications that outweigh its benefits. Acute intakes of more than 20 mg/kg iron per day can lead to gastric upset, constipation, nausea, abdominal pain, vomiting, and faintness.16

Excessive tissue iron may cause alteration in iron metabolism and is associated with insulin resistance and type II diabetes.18 Research showed that mitochondrial dysfunction and hepatic gluconeogenesis are responsible for this kind of alterations. Another study reported that mitochondrial breakdown due to iron overload caused damage to hippocampal neurons19 in the brain, which may contribute to disorders like Parkinson’s disease.20, 21

Also, there is a genetic disorder called hemochromatosis2 where iron metabolism is disrupted and iron accumulation may affect the liver, heart and endocrine glands.23 Also there are incidents of poisoning from accidental iron overdose that are fatal, particularly for children.

To conclude, the take-home message of this article is that in order to stay healthy, we must incorporate iron-enriched food and supplements in our diet that help meet the daily need for iron. However, one should be mindful about how much iron to consume since both iron deficiency and iron overload could be harmful for health.

One Response to "Iron – Essential Mineral for your Health"