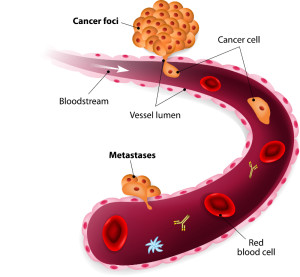 Scientists are always looking for new and better ways to find out if cancer cells are present or moving through the body to a different site. These cancer cells are hard to find since usually so few of the moving or circulating tumor cells are present in the blood and lymphatic fluid. In fact, in a one milliliter (ml) sample of blood contains about 5 million blood cells and may contain as few as 10 circulating tumor cells. Recently, researchers at Penn State University, Massachusetts Institute of Technology and Carnegie Mellon University announced the results of a simulation model research study called Acoustic Separation of Circulating Tumor Cells (www.pnas.org). The results showed that the demonstrated procedure located on average about 83% of the cancer cells. These results show great promise for use on actual patient samples. It also leads to the question of what are circulating tumor cells and how does acoustic separation work.

Cancer cells, when examined under a microscope, often look quite different than normal cells. They appear larger or smaller than other cells and have a very different shape. The nucleus of cancer cells will look larger and darker than normal healthy cells because it contains more DNA and has disorganized chromosomes present in abnormal numbers. This is because Cancer cells divide and reproduce more rapidly than normal cells, therefor cancer cells remain immature looking or undifferentiated. The immaturity of the cancer cells is used to help in the grading of the cancer. Cancer cells are graded from 1 to 3. A grade 1 cancer cell is the least aggressive or least likely to move and a grade 3 is the most aggressive and the most likely to move elsewhere in the body.

Cancer cells are also able to go undetected by the immune system for a long enough time to cluster together and form a tumor simply by evading the immune cells that come to the scene when something is noticed to be different in the cell. Cancer Cells may also give off a chemical that inactivates the immune responders and prevents them from destroying the abnormal cell. Because cancer cells can reproduce so rapidly, it does not take long for the tumor cluster to form. This is in contrast to a normal cell that when it becomes damaged, the immune system immediately responds and removes the damaged cells, allowing normal healthy tissue to grow.

Another important difference between cancer cells and normal cells is their use of available blood supply. All cells need blood and nutrients to survive ,grow and do their job correctly. Angiogenesis is the process of a cell finding the necessary blood supply and diverting it to the cells in need of nutrition. A normal cell will use angiogenesis only as a part of growth and development. When the blood supply is no longer needed by the normal cell, it is stopped. Cancer cells will use angiogenesis on a constant basis, even when growth and development is no longer needed. In other words, it will keep the blood supply active, possibly even creating its own blood supply to keep feeding it so the cells will keep producing and growing.

Since there is a readily available blood supply for cancer cells and the cancer cells don’t easily adhere to each other, it is easy for a few cancer cells to move away from the main tumor, known as the primary tumor site, and travel to other parts of the body. These free floating cancer cells are known as Circulating Cancer Cells or CTC’s. If they can be captured and examined, the CTC’s can be an excellent source of information about a patients cancer status and response to their current course of treatment. CTC’s are difficult to capture for examination because they are present in very small numbers in the blood supply.

One of the major concerns for cancer patients is if the cancer has metastasized or moved to another part of the body. Tumor metastasis is a major cause of cancer deaths. Current medical science has some understanding of how metastasis occurs and how to treat it, but that knowledge is far from complete. What is known is that tumor cells break off from the primary tumor site and take over the surrounding normal tissue first, because the cancer cell is unable to stop the reproduction process. Once the tumor cell has invaded healthy tissue, it then, enters the nearby blood vessels or lymphatic fluid and is moved through the circulating blood to some distant tissue. Once it locates another spot, it will leavethe blood vessel and attach itself in seed-like fashion to the new environment, begin to grow and colonize the new area with another tumor cluster that consists of cells from the primary site. If a sample were to be taken from the new site, the cell would be the same as the cells obtained from the primary site. If Circulating tumor cells can be detected sooner, metastasis can perhaps be minimized or eliminated by a more effective, patient specific treatment.

Locating and separating the Circulating Tumor Cells from the whole blood can be done to help determine a patients current cancer state. It can be thought of as a liquid biopsy to help guide cancer treatments and offer further insights into metastasis and risks of further complications. The Acoustic Based Separation method, as used in the simulation study done at Penn State et all, offers a fairly simple, safe and effective way to separate the circulating tumor cells from the other blood cells. This method uses sound waves, similar to ultrasound, to separate the cells from a simple blood sample that is pumped through the acoustic device.

The device itself is fairly simple to operate and compact in size as it, consists oftwo acoustic transducers that are placed on either side of a very small channel. The transducers are set to a specific angle to produce a standing acoustic wave field inside the small slopedchamber that contains fluid. The wave field will have areas of alternating high and low pressure. When a whole blood sample is pumped into the channel, the transducers will be angled in such a way that the standing wave field, with its alternating peaks and troughs of flow, will push the cells larger than a specified size into the center of the channel and the smaller cells to the sides. Typically the red blood cells as well as other particles and cells, since they are smaller, will be forced to the sides. Circulating Tumor Cells, which are usually larger than red blood cells, will stay in the center of the chamber to be collected and sent to the pathology lab for further evaluation.

The whole process sounds very simple in theory. In reality, the process is quite complicated due to the number of variables involved. One of the major variables is the flow rate. This refers to the rate of movement of the whole blood sample through the sound waves.

The benefit of this acoustic based device is that a large number of patient specific cells can be obtained through a simple, relatively painless blood draw as opposed to an invasive biopsy procedure, which comes with a risk of infection, blood loss and patient discomfort.Non acoustic based separation techniques for biopsies and examination can cause damage and changes to the cancer cells simply because they must be obtained and moved using a pipette and or needles. Because the acoustic sample is not manipulated during the collection processthe patient specific Circulating Tumor Cells can be kept in their natural state, separated and examined under the microscope offering a more pure sample of the cell as it actually is. These obtainedsamples can then be used for non-invasive testing for medication response during chemotherapy treatments and make it easier to adjust treatments if needed.

The recently reported study recommends further research into the use of this acoustic device, as tumor cells can be different sizes, shapes and density depending on the type of tumor cells involved in the disease process. These differences can affect the ability of the cancer cells to be separated out. The study recommends that actual patient samples, be used to identify and compile a statistical list of the different physical and mechanical properties of tumor cells. This statistical list, could then be used to further refine the procedures used in the study and confirm the 83% success rate obtained in this study. The future research will involve many extensive clinical trials to compile the necessary data for the statistical lists. The future research is warranted and offers another avenue of hope for cancer patients.

Iron - Essential Mineral for your Health