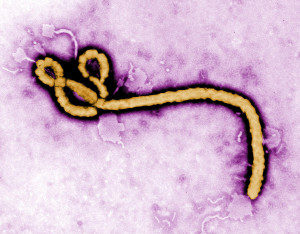 Ebola, or Ebola hemorrhagic fever, is a zoonotic disease – a disease that spreads from one species to another species.1 Zoonotic diseases recur through out history, from the Black Death (Bubonic Plague) of the middle ages to the 1918 Spanish flu pandemic and, more recently, to the West Nile Virus outbreak.1 The rapid disease progressionac companying Ebola virus infection does not afford most of us the time to acquire immunity.2 Consequently, to develop immune-based therapies that treat infected individuals and that protect uninfected individuals, researchers had to determine what constitutes a protective immune response to Ebola. In 2015, almost 40 years after the initial Ebola outbreak,multiple clinical trials are scheduled to begin in West Africa that will test the effectiveness ofrecently developed antibody and vaccine therapies in treating Ebola.3, 4

History of the Ebola virus

In the late summer of 1976, in Yambuku, Zaire (now the Democratic Republic of the Congo), a 44-year-old man entered the Yambuku Mission Hospitalwith a fever.5 He was the first known Ebola patient in the first recorded Ebola outbreak. Since 1976, sporadicoutbreaks of Ebola have occurred in different African countries, with 25% to 89% of infected individuals succumbing to the hemorrhagic fever.6 To spare the inhabitants of Yambuku the stigma of having a deadly virus named after their village, the international medical team who responded to the first outbreak chose to name the virus after the nearby Ebola River.7 Because of its thread-like morphology,the Ebola virus is classified as a filovirus and joins the Marburg and the Lloviu viruses as members of the family Filoviridae.8–10 Researchers have isolated five different species of the Ebola virus:Zaire, Bundibugyo, Sudan, Taï Forest, and Reston.8 All of the species except the Reston species cause disease in humans, with the largest Ebola outbreaks involving the Zaire,Bundibugyo, and Sudan species.6,8 The Reston species causes lethal disease in nonhuman primates and has been connected with Ebola outbreaks in research monkey populationsin the Philippines.6,8 A virus that causes lethal disease in one (or more) species evolves to co-exist with another species – its natural host. Analysis of the genomes (ie, genetic material) of numerous mammalian species uncoveredco-evolution, as measured by integration of Ebola virus gene fragments, in various small animals, such as bats, rodents, shrews, and tenrecs.11 Given the considerable number of these species in Africa, identifying which one is the natural host is a daunting task.For this reason, the natural host or reservoir for the Ebola virus remains unknown.

The Ebola virus undermines and overwhelms the immune system

A protective or successful immune response is dependent upon the combined actions of cells of the innate and adaptive immune systems. Macrophages and dendritic cells are innate immune cells that are found not only in the spleen and lymph nodes but also in the skin, lung, and gut – the port of entry for most pathogens (ie, disease-causing viruses, bacteria, and parasites).12 Other innate immune cells, such as neutrophils and eosinophils, circulate through the blood and mobilize to sites of infection when summoned.12 All innate immune cells express specialized receptors on their cell surface and in intracellular vesicles that recognize evolutionarily conserved patterns in molecules derived from pathogens.12 After engagement of these receptors, the innate immune cells become activated and produce soluble factors,which act directly on the pathogen to slow its replication and, in some cases, destroy it.12Some of the soluble factors, however, act on immune cells and play vital roles in calling them to the site of infection and in enhancing their anti-pathogen response.12 The innate immune response is in full swing within hours of the pathogen entering the host. By contrast, the adaptive immune response takes at least four days to develop.12 Activated macrophages and dendritic cells migrate to lymph nodes, where they digestpathogen-derived proteins into peptides (a chain of amino acids) and present them on their cell surface to T cells.12 Only those T cells that carry a T cell receptor that recognizes a presented pathogen-specific peptide are activated and mature into helper or cytotoxic T cells. Helper T cells, as their name indicates, “help” other immune cells transition into fully functional cells through communication channels that include soluble factors, known as cytokines, and cell-cellinteractions.12 B cells are one of the immune cell subsets that receives assistance from helper T cells in order to mature into antibody-producing cells, known as plasma cells.12 Antibodies produced during the course of infection bind structures on the surface of the pathogen and, as a result, prevent the pathogen from spreading to uninfected cellsor mark the pathogen for destruction by macrophages, eosinophils,and neutrophils.12 Cytotoxic T cells, in contrast to helper T cells, target and kill infected cellsby producing enzymes that perforate the cell membrane and that degrade cellular DNA.12 Most pathogens have devised schemes to subvert the actions of the immune system, and the Ebola virus is no exception (Figure 1).13,14 The Ebola virus gains entry intothe body through the use of contaminated needles orthrough direct contact with cuts in the skin or with mucosal membranes in the eyes, nose, and mouth.14 At these ports of entry, the Ebola virus encounters and infects innate immune cells, specifically macrophages and dendritic cells.13,14 Once within these cells, the virus begins not only to replicate but also to disrupt the innate immune response.13,14 The Ebola virus shuts down the production of potent natural anti-viral agents known as interferon-alpha (IFNa) and interferon-beta (IFNß).13,14

Figure 1. The Ebola virus undermines and overwhelms the immune system.

Viral proteins that are either cleaved off the surface of infected cells or exposed on the surface of the virus can activatemacrophages, dendriticcells, and neutrophils and promotethe production and release of abnormally high levels of pro-inflammatory cytokines (eg, TNFa, IL-6, IL-8).13,15,16 Such high levels of pro-inflammatory cytokines, referred to as a cytokine storm,lead to systemic effects such as fever,leaks in small blood vessels (vascular leakage), shock due to extremely low blood pressure (hypotensive shock), and diffuse bleeding due to the impairedability to form blood clots (coagulopathy).13–16 The Ebola virus also disrupts the adaptive immune response.13,14,17 First, itimpairs the ability of infected dendritic cells to activate T cells.13,17, As a result, reduced levels of T cell-specific cytokines, such as IL-2, are detected in the blood of infected individuals.13,14 Second, the virus inducesT cells and B cells to undergo a process known as apoptosis or programmed cell death. As a consequence, the numbers of T cells and B cells in the blood of infected individuals are dramatically decreased.13,14 This is known as lymphopenia. The Ebola virus, once it replicates, assembles, and buds from infected macrophagesand dendritic cells, spreads throughout the body, traveling through blood and lymphatic vessels.13,14,18 The blood route directs the virus to the liver, where it infectsand damagesresidentliver cells or hepatocytes.17 This damage leads to impaired liver function (eg, reduced production of clotting factors) and, eventually, to hemorrhage and organ failure.13,14

Components of a protective immune response to Ebola

Table 1. Differences in the adaptive immune response and in the viral load of individuals with lethal and nonlethal Ebola infection.

Armed with this knowledge, researchers designedimmune-based therapiesto treat Ebola that targetthe actions of cytotoxic T cells and antibodies. The strategies that they have taken are two-fold (Figure 2). The first strategy is passive immunization, which is the transfer of antibodies from an immune individual to a non-immune individual. The second strategy is active immunization, which is vaccination of non-immune individuals with a vaccine vector containing Ebola-derived proteins that are known to induce protective cytotoxic T cells, antibodies, or both.

See text for details. Although only memory B cells are shown in this diagram, it is important to note that memory helper T cells and memory cytotoxic T cells are also generated following active immunization or infection. Memory B and T cells respond faster than naïve or inexperienced B and T cells. The goal of any vaccine strategy is to generate memory B and T cells, which in essence provide the host with immunity for life.

The practice of passive immunization has been around for over 100 years; Emil von Behring used serum therapy – what he called passive immunization – to treat diphtheria in children at the turn of the 20th century.23 Its use continues today to treat tetanus, rabies, and chicken pox in those patients who are unable to produce their own antibodies or who are not immune to the pathogen.24 During the 1995 Ebola outbreaksin the Democratic Republic of Congo, a small fraction ofEbola patients received blood transfusions (which contained anti-Ebola virus antibodies) from patients who survived the Ebola infection.25 Although the results were promising, the effectiveness of the treatment could not be determined because the studies were not properly controlled.25 In the intervening years, several research groups have identified and purified anti-Ebola virus antibodies and have tested their ability to protect nonhuman primates after Ebola infection.26 When ZMAb, a combination or “cocktail” of three anti-Ebola virus antibodies,was given to macaques (old world monkeys) 24 hours after Ebola infection, 100% of them survived, whereas 50% of macaques survived when the same cocktail was given 48 hours after infection.26 Furthermore, the antibody treatment,by controlling spread of the virus, permitted the development of a protective adaptive immune response. This was evidenced by the survival of antibody-treated macaques after re-infection with Ebola virus.26 Reconfiguring and optimizing the components ofpreviousanti-Ebola virus antibody cocktails have lead to the development of a new cocktail known as ZMapp.27 Unlike the previous cocktails, ZMapp treatment could provide protection to macaques up to 5 days after Ebola virus infection.27 Clinical trials are expected to begin in February 2015 to test the efficacy of ZMapp in treating Ebola-infected patients in Liberia.4

The Ebola vaccines that are currently in the pipeline have different vaccine platforms but express the same surface glycoprotein from the Zaire species of Ebola virus.28 One of these vaccines, which uses a chimpanzee adeno virus vaccine vector, provided 100% protection to macaques when infected with the Ebola virus 5 weeks after vaccination.29 The same level of protection from a subsequent Ebola virus challenge required a second or “booster” vaccination. Robust antibody and cytotoxic T cell responses correlated with immune protection and survival.29 The same Ebola vaccine has moved on to Phase 1 clinical trials to test its safety and its ability to generate an immune response in healthy human volunteers.30 Antibody, helper T cell, and cytotoxic T cell responses against the Ebola glycoprotein were detected in all participants.30 The most common side effects of the vaccine were fever, muscle pain, and fatigue. A second Ebola vaccine,which was tested for its efficacy in macaques,uses a vesicular stomatitis virus vector in place of the chimpanzee adenovirus vector.31 Macaques who were vaccinated with this vaccine mounted strong immune responses to the Ebola glycoprotein and were completely protected from Ebola virus infection.31 A randomized large-scale clinical trial has begun in Liberia to assess the efficacy of these two Ebola vaccines.3

“The scale of the current Ebola outbreak in West Africa is unprecedented, and specific medical countermeasures are needed for this and future outbreaks. It is imperative that any potential countermeasures, including vaccines, be tested in a manner that conforms to the highest ethical and safety standards in clinical trials designed to provide a clear answer to the question of whether a candidate vaccine is safe and can prevent infection. This trial is designed to provide such answers.”

Iron - Essential Mineral for your Health