Effect of BCAA and Glutamine on High Intensity Performance 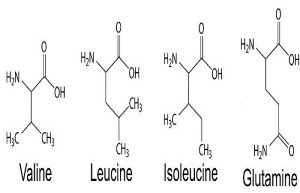 Fatigue is a state of feeling tired, exhausted and lethargic. Many people suffer this condition at some point in their lives. It can be due to many reasons physical as well as mental. Physical fatigue is inability of muscles to maintain physical performance and mental fatigue is due to factors like stress, lack of sleep, over burden etc. In athletes it usually occurs due to increase in the amount or intensity of the exercise or training. Although it is a temporary condition and is usually related to fuel depletion, dehydration and low blood glucose level in the body. Fatigue caused by high intensity exercise is the result of increase in fatigue triggering factors such as hydrogen ions, lactate, phosphorous, ammonia, ADPP and depletion or decrease in ATP. Accumulation of these fatigue causing factors, result in poor exercise performance. There are also signs of muscle pain, inflammation and discomfort in these individuals, which harms their performance. The effectiveness of performing an intense exercise depends upon the capability of the body to generate ATP continuously along with delay in the occurrence of fatigue.

Proteins or amino acids are the building blocks of our body. Amino acids combines to form proteins and a large portion of cells, muscles and tissues are made up of amino acids. Two main amino acids which impact blood fatigue factors and cytokines stimulation are BCAA and glutamine, which play a major role on increasing the performance of any physical activity. High intense exercise leads to fatigue due to ATP depletion in the body, which causes the reduction of hydrogen and ammonium ions resulting in poor performance in any physical activity. Intense exercise or high performance exercise also leads to muscle tissue damage, which triggers inflammation response resulting in muscle pain, discomfort and poor performance.

Various physical activities involve high energy e.g. Rowing, which requires high energy consumption and hence releases different intracellular proteins in the blood like CK, Lactate, Cytokines which activate inflammatory mechanism. BCAA gets metabolized in the skeletal muscles and synthesize glutamine whose levels are low after intense exercise in the blood, which leads to exhaustion and various infections in the blood. Therefore, supplementation with BCAA and glutamine can improve athlete’s performance.

BCAA or branched chain amino acids are essential amino acids (which our body cannot synthesize and has to be taken in our diet) which, are metabolized in the skeletal muscles. These include Leucine, Isoleucine, and Valine. BCAA are used to prevent fatigue, improve intensity of exercise and reduce protein and muscle breakdown during intense exercise.

It is a conditionally-essential amino acid or non-essential amino acid found naturally and abundantly in human skeletal muscles and blood plasma. It plays a role in protein synthesis, maintains the acid-base balance, helps in functioning of immune system and provides fuel in the form of nitrogen and carbon to the different cells in the body. After exhaustive and intense exercise the level of glutamine in the body deceases therefore supplementing glutamine after exercise has beneficial effects on infections and fatigue in growing juvenile athletes.

Kidneys are the primary users of glutamine, where ammonia separates from glutamine to maintain acid-base balance in the blood. With intense training or with high protein diet, metabolic acidosis (acid level in blood) increases therefore, more glutamine excretes from urine causing decrease in plasma levels of glutamine which leads to depleted energy, low immunity, and increase muscle wasting.

A study was performed to investigate the effect of supplementation of BCAA and glutamine on blood concentration of lactate, phosphorus, ammonia, CK, and cytokines in juvenile athletes which were subjected to maximal intensity rowing exercise.

Treatment: All the athletes received BCAA, glutamine and Placebo three times a day. Blood samples were collected on the day of testing at three stages

Rowing test was conducted in these athletes who performed 2,000 meter race at their own individual speeds and were subjected to supplementation with BCAA, glutamine and Placebo three times a day. The blood fatigue factors such as Lactate, Phosphorous, and ammonia concentration were analyzed, along with CK activity and biochemical analyses for IL-6, IL-8, and IL-15.

The blood Lactate concentration varied at each stage but was highest at the end of the exercise in all the three groups (PS (Placebo), BS (BCAA) and GS (Glutamine)). compared to the resting stage and was lower in the recovery Stage as compared at the end of exercise.

Conclusion: During high intensity exercise the rate of lactate production exceeds the rate of removal from the body. The stimulated lactate triggers acidosis and suppresses enzyme activation required for glycolysis, which leads to lessATP generation resulting in fatigue. Due to depletion of Glutamine from the body as a result of acidosis, carbohydrate depletion in the TCA cycle also increases which results in fatigueness in the body. Glutamine supplementation helps in recovering fatigue by preserving the ATP in the TCA cycle and decreasing the carbohydrate depletion.

Conclusion: Increase in phosphorous levels causes decrease in power eventually resulting in poor performance during intense exercise. With the increase in phosphorous levels the cross bridges in the muscle fibers decreases leading to decrease in ATP generation and increase in the production of hydrogen ions which combine with phosphorous to form inorganic phosphate. The results showed that levels of phosphorous were decreased during recovery stage. As seen in the above lactate results, BCAA and glutamine supplementation might have contributed in the maintenance of the energy or ATPs in TCA cycle and reduced the creation of inorganic phosphate.

Conclusion: During high intensity exercise the level of ammonia increases in the blood which leads to amino acid metabolism. Ammonium ions are either discharged by glutamine with the help of enzyme glutaminase catalysis during oxidative deamination process or are accepted by glutamine when released from glutamate. High intensity exercise decreases Glycogen levels which causes decrease in alpha ketoglutamate (an intermediate of TCA cycle) due to which glutamine level decreases which causes increase in ammonium ions inside our body which leads to fatigueness. Glutamine supplementation hinders the increase in the levels of ammonium ions inside the body.

EFFECT OF CK ACTIVITY AFTER SUPPLEMENTATION

Conclusion: During recovery stage the level of CK enzyme increases which generates ATP and increases energy and thus removes fatigueness during intense exercise. The CK enzyme generates ATP by decomposing creatine phosphate during high-intensity exercise. It acts as a marker for tissue damage due to exercise stresses. Results showed that Glutamine supplementation showed a positive effect in protection against tissue damage occurring due to exercise stress.

EFFECT OF BLOOD CYTOKINES (IL-6, IL-8 AND IL-15) AFTER SUPPLEMENTATION

The blood cytokines IL-6 and IL-8 showed no significant difference among the three groups and Stages. The blood IL-15 concentrations of the PS and BS groups at the end of exercise were different from those in the recovery stage, but there was no significant difference between these stages in the GS group. It was observed that in the recovery stage BS group alone appeared lower as compared to at the end of the exercise.

Blood fatigue factor “phosphorous” level was lowered after supplementation with BCAA or Glutamine during the recovery stage. Blood CK level was lowered in the group supplemented with glutamine suggesting that reduction of fatigue factor stimulation. Similarly, glutamine supplementation enhanced immune function and inflammatory reaction after intense exercise. Thus supplementing with BCAA and Glutamine have beneficial effects during recovery stage of intense exercise.

From stem cell break through to major concerns: the japanese story