Rolapitant (Varubi™): A Novel Agent for Management of Chemotherapy-Induced Nausea and Vomiting (CINV) 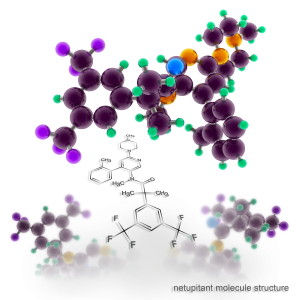 Chemotherapy-induced nausea and vomiting (CINV) is one of the most patient feared adverse effects of chemotherapy.1 There are five main types of CINV: acute, delayed, anticipatory, breakthrough, and refractory, listed in Table 1. The goal of treating CINV is preventative in nature, to eliminate symptoms with the appropriate use of anti-emetics. It becomes essentially important to prevent CINV because patients suffer from decreased quality of life (QoL), less than ideal chemotherapy adherence, and decreased functional status.Despite advances in pharmacological therapies in the last two decades, the mechanism explaining CINV remains fairly incomplete.2

The difficulty in managing CINV pharmacologically comes from the lack of understanding researchers have regarding the underlying mechanism of nausea and vomiting. Nausea is an unpleasant sensory and emotional experience, associated with a perception of epigastric or upper abdominal discomfort while emesis is a forceful expulsion of gastric contents from a coordinated contraction of abdominal muscles, diaphragm, and pylorus.2 Severe nausea and vomiting in oncology patients carries its own dangers: dehydration, malnutrition, electrolyte imbalance, and significant decline in QoL. CINV is thought to be mediated by neurotransmitters (NTs), mainly serotonin, substance P, and dopamine, in the central nervous system (CNS) and gastrointestinal (GI) tract.3 Based on current research, there is a central and peripheral mechanism explaining nausea and vomiting due to chemotherapy.3 The central pathway consists of the toxic chemotherapeutic agent triggering the chemoreceptor trigger zone (CTZ), causing the release of NTs and activating the vomiting center (VC) in the lateral medulla.In addition, the toxicity of chemotherapy can also irritate the GI mucosa resulting in a similar activation of the VC.3 While these two mechanisms seem to work independently, recent data has shown that the nucleus tractus solitarius (NTS) neurons may be an point of convergence, suggesting a combined mechanism.3 The complexity of mechanism sheds light to the limited efficacy of pharmacology in preventing CINV.

Current epidemiology reflects that about 70-80% of patients receiving chemotherapy will experience CINV.4 About 60% of patients experience CINV despite pharmacological prophylaxis. It is evident that current pharmacological therapies are not efficacious and a great demand lies for further research. Ideally, research should focus on the patient population at high risk for CINV presentation. Namely, female patients, age <50 years old, patients requiring highly emetogenic chemotherapy, pre-treatment expectation of severe nausea and vomiting, and history of motion or pregnancy related nausea and vomiting create high susceptibility for CINV.2,4 Interestingly, having a history of high alcohol intake decreases the likelihood of CINV. Understandably so, the CNS seems to become tolerant to noxious stimuli and react less with increasing exposures. Medications must be geared towards patients with these risk factors in order to exert the most benefits.

There are a myriad of classes of medications indicated for the prevention and treatment of CINV. Despite the availability of three different guidelines for the treatment of CINV, treatment modalities remain similar for the five types of CINV. For acute and delayed emesis after the administration highly or moderately emetogenic chemotherapy, three different options may be utilized: a NK-1 antagonist regimen (NK-1 antagonist + serotonin receptor antagonist + dexamethasone), a Netupitant based regimen (Netupitant + palonosetron + dexamethasone) or an Olanzapine based regiment (olanzapine + palonosetron + dexamethasone).5 With the administration of low emetogenic chemotherapy, a single agent such as a serotonin antagonist, dexamethasone, prochlorperazine, or metoclopramide is recommended.5 No prophylaxis is recommended for minimally emetogenic chemotherapy.5 It is important to note; however, the level of emetogenicity of each chemotherapy agent was created by a researcher named Hesketh and has since been revised.6 Therefore, the regimens indicated for certain emetogenicity levels are less heavily considered in clinical practice. For anticipatory CINV, benzodiazepines such as Lorazepam are the mainstay. Lastly, for breakthrough and refractory CINV, agents such as prochlorperazine, olanzapine, scopolamine, and metoclopramide can be added to maximize effects.

On September 2nd, 2015, Rolapitant (Varubi™), a selective and competitive antagonist of substance P/NK receptors, was approved by FDA, and is indicated in combination with other antiemetics for the prevention of delayed nausea and vomiting associated with initial and repeated courses of chemotherapy, including highly emetogenic chemotherapy.6 Twenty two days later, Rolapitant was included in the updated National Comprehensive Cancer Network (NCCN) Antiemesis guidelines, as an alternative to Aprepitant or Fosaprepitant, the existing NK-1 antagonists.7 Rolapitant was developed by Tesaro, an oncology-focused biopharmaceutical company aiming to uncover innovative therapies surrounding chemotherapy.6 Like Tesaro, there are numerous companies that have been working to treat delayed nausea and vomiting, a phenomenon that, so far, has minimal improvement from current therapies.

Rolapitant is available in 90 mg tablets and a dose of 180 mg (2 tablets) should be given 1-2 hours prior to start of chemotherapy in combination with dexamethasone and a serotonin receptor antagonist.6 Dexamethasone dosing is 20 mg for Day 1 and 8 mg twice a day for 3 subsequent days. After administration, the maximum concentration of a 180 mg dose is absorbed in about 4 hours. It is highly protein bound and extensively distributed in tissues. Rolapitant is metabolized by CYP3A4, a major drug enzyme, into the active metabolite M19. Regarding metabolism, an important precaution in using Rolapitant is the interaction CYP2D6, an enzyme responsible for the metabolism of certain drugs. Of note is Thioridazine, an antipsychotic, which is increased in levels due to Rolapitant’s inhibition of CYP2D6, causing an increased risk of QTc prolongation and Torsades de Pointes, a fatal arrhythmia.6 Therefore, Rolapitant is contraindicated in patients receiving Thioridazine and should be used cautiously with narrow therapeutic index (NTI) medications that are metabolized by CYP2D6.6 Most importantly, however, Rolapitant is not an inducer or inhibitor of CYP3A4, reducing numerous major drug interactions.6 Upon elimination via the hepatic/biliary route, limited unchanged Rolapitant and M19 is found in the urine.6

Quick inclusion into the NCCN guidelines reflects that Rolapitant may in fact carry some promise for delayed nausea and vomiting. However, it becomes important to compare it to Aprepitant and Netupitant/palonosetron (Akynzeo), the alternative NK-1 antagonists listed in the NCCN guidelines for treatment of CINV. Rapoport and his colleagues conducted a global, randomised, double-blind, active controlled, phase 3 trials called HEC-1 and HEC-2, in 155 centers, 26 countries.8 Patients 18 years old or greater, not previously been treated with cisplatin, Karnofsky performance score of 60 or greater, and a predicted life expectancy of 4 months or greater were treated with Rolapitant + dexamethasone + serotonin antagonist or an active placebo.8 The HEC-1 trial consisted of 526 subjects and the HEC-2 consisted of 544 subjects, and results were obtained using a modified intent to treat design.The primary endpoint was proportion of patients receiving a complete response (no emesis or use of rescue medications) in the delayed phase (>24-120 hours after initiation of chemotherapy).8 Both phase three trials demonstrated that Rolapitant was superior to placebo in treating CINV.8 Of note, however, is that Rolapitant was compared to placebo and the serotonin antagonist used was granisetron, which is less than ideal for delayed CINV, as compared with palonosetron.8

In conclusion, Tesaro has claimed an expansive part of the CINV industry from the approval of Rolapitant. With its inclusion into the NCCN guidelines not long from approval, its prominent role in clinical practice seems to be the next logical step. Based on its advantages and even its disadvantages, Rolapitant will be the perfect competitor for Aprepitant. It will now be interesting to see if Rolapitant reduces the incidence of CINV in clinical practice.