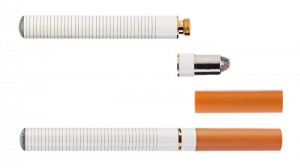 Electronic Cigarettes, also known as e-cigarettes or Electronic Nicotine Delivery Systems (ENDS) or vaping, have been around since the early 2000’s and are advertised to be a safe, tobacco free alternative to cigarettes. E-cigarettes came to the United States about 7 years ago and have expanded into a multi-billion dollar industry that has over 466 brands and 7764 flavors. What exactly is an e-cigarette, how does it work and what are the positive and negative effects of using? Read further to know everything about e-cigrattes, they positive and negative effects and more.

HOW DOES AN E-CIGARETTE WORK?

A standard cigarette needs some flame source (usually a match) to ignite the tobacco and cause it to burn. The burning tobacco releases the nicotine containing smoke. This nicotine rich smoke is then inhaled into the lungs by the smoker.

The basic e-cigarette system uses a battery operated device that uses a mechanism to heat a liquid refillable cartridge, converting the liquid to a mist when the user breathes in or inhales. The user inhales the heated mist and then exhales it as smoke. The e-cigarette often is shaped like a regular cigarette but does not contain tobacco, need a match to light it or make ashes. The e-cigarette has a rechargeable lithium battery that heats the cartridge, known as a vaporization chamber and the atomizer. A new liquid containing cartridge must be attached before the battery is turned on to activate the device. The cartridge end is placed in the mouth to use for inhaling. As the user inhales, the liquid is heated and converted to a mist, carried into the lungs and exhaled as smoke. It imitates the action of smoking a regular cigarette, something that users really like.

WHAT IS IN THE LIQUID REFILLABLE CARTRIDGE?

The cartridge contains very few ingredients. Most are not toxic or do not cause cancer since they are present in very low numbers.

In comparison, a tobacco cigarette contains thousands of chemicals and compounds many of which are known to or believed to cause cancer. These include trace metals such as cadmium, arsenic, chromium, nickel and lead, tobacco specific nitrosamines and hydrocarbons. Some studies have shown very small amounts of these elements in e-cigarettes, mostly in the metal portion of the cartridge and atomizer.

Nicotine is present in the e-cigarettes. E-cigarettes were designed to deliver nicotine in a way that imitates smoking tobacco cigarettes but without the smoke. Refill cartridges can be purchased with amounts of nicotine that vary from 0mg to at least 24 mg. This allows the user to select how much nicotine they want to inhale with each use. However, the accuracy of the amount of nicotine delivered is not assured as the labeling of the containers is not always accurate or consistent. The FDA found that the actual amount of nicotine delivered with each puff of the e-cigarette vary widely from what is listed on the label. They also found that the range of variability was too widespread for the nicotine levels to be declared safe. The FDA also found the presence of nicotine related impurities. Some researchers say the FDA is inconclusive and needs to be studied further. At this time there are too many variables in producing the refill cartridges to conclusively say how much nicotine is in each container and what a safe level is.

Currently, the refill vial could contain anywhere from 20mg/ml to 100mg/ml, assuming it contains what the label reads. This is important to know because a lethal dose of nicotine is 10mg for children and between 30-60 mg for an adult. This means a person could easily and accidentally overdose and even die. Storing the refill cartridge out of the reach of children and pets is very important.

Nicotine is inhaled directly into the lungs and absorbs quickly into the blood stream increasing the blood levels of nicotine within 5 minutes of the first puff. This can cause the heart rate and blood pressure to increase. This can lead to the user feeling a sense of wellbeing including a decrease stress and the ability to think more clearly. This feeling of wellbeing and improved mental performances can lead to addiction to nicotine, meaning the person needs the nicotine in order to keep their good feelings, which leads to either more tobacco smoking or e-cigarette use.

WHAT ARE THE EFFECTS OF E-CIGARETTES ON A PERSONS HEALTH?

E-cigarettes were first designed to cut back on the number of health issues caused by cigarette smoking. They were introduced to the world as the safer and harm reducing way to cut back or even quit smoking. E-cigarettes do assist in quitting smoking but there is still a risk to users of toxicity and other health problems. The risks of smoking tobacco based products is well researched and well known but the risks and effects of e-cigarettes are not as conclusively known. For example:

Additional studies have been done to look at the positive and negative effects of e-cigarettes. For example the electronic cigarette forum identified a total of 388 symptoms and effects. 10 different organ groups reported effects, as did the chest nose and throat regions. The breathing system including the mouth, nose and throat had the most symptoms with the nervous system and sensory systems close behind. The digestive system as well as the bones and muscles showed changes in health effects while the urinary system, immune and endocrine system showed no changes. Below are some samples of reported system changes.

One of the key systems that can be affected by the use of e-cigarettes in the cardiovascular system. One research study looked specifically at the effects on heart and blood pressure. 32 participants used 1 e- cigarette per day every day for 4 weeks and observed that no changes in heart rate or blood pressure occurred. Another larger study showed that 17 of the participants or 3.5% either reported an increase in blood pressure or had it reported by a healthcare provider. Patients also reported an increased heart rate and palpitations believed to be a direct result from nicotine. At this time, it appears that the effects on the body and overall long term health are small in comparison to tobacco smoking. More research into the long term effects on each of the body’s systems and the use of e-cigarettes is needed.

HAVE THERE BEEN STUDIES TO SEE IF E-CIGARETTES TOXIC TO CELLS?

This is a difficult question to answer as research studies on the cytotoxicity or cell toxicity are very few in number and very limited. One study was completed in 2012. It reported on 36 different e-cigarette refill cartridges and embryonic stem cells. The study found that 15 of the samples were moderately cytotoxic and 12 samples were highly toxic to the stem cells. It was noted that the propylene glycol and glycerol were not toxic to the cells, however peaks in toxicity were noted in relation to the different flavors and flavor packs used. This study looked at the liquids only and not the vapors so the study is considered to be limited for drawing conclusions. This study also did not compare the results to standard cigarettes. The authors of the study also reported that the amount of cell toxicity may have been underestimated by as much as 100 times. This study also had the cells submerged and grown in the liquid for 48 hours as opposed to being inhaled as vapors and coming into contact with the stem cells for only 1-2 seconds

IS THERE A RISK OF SECOND HAND SMOKE OR PASSIVE SMOKE?

SINCE E-CIGARETTES ARE BATTERY OPERATED ARE THEIR ANY OTHER DANGERS?

Yes. Rechargeable lithium batteries are used to power the e-cigarette device. There is a danger of overcharging the battery causing an explosion and fire. There is also the danger of design defects or not using the correct battery that can lead to fires. The Use of e-cigarettes does help cut down on the number of residential fires caused by smoking. It is important that the manufacturers follow quality control standards to prevent such accidents from happening and it is important that e-cigarette users use the devices in a safe manner.

E-cigarettes can be used to help smokers reduce their tobacco use and even assist in stopping smoking. There is the possibility that millions of lives can be saved and smoking related diseases can be better controlled by their use. There are still many unknowns about e-cigarettes, including long term effects on the body because of inconclusive evidence from studies completed and not enough studies being done. In addition, there is a lack of Federal oversight, including limited regulations by the Food and Drug Administration at this time and there are no set standards for quality control and labeling the products. These are issues that need to be studied and regulated further.

There are many medical topics that are of an ongoing interest and importance. One of…

Rolapitant (Varubi™): A Novel Agent for Management of Chemotherapy-Induced Nausea and Vomiting (CINV)

One Response to "Electronic Cigarettes, What’s The Scoop?"