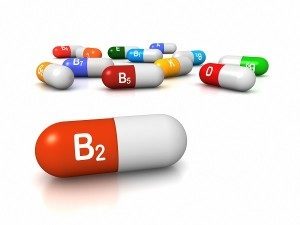 Riboflavin, or vitamin B2, is important for metabolism, converting carbohydrates and amino acids to useable energy for the body, and as an antioxidant protecting against tissue damage from free radicals. The earliest recorded isolation of riboflavin was in 1879 by A.W. Blyth, who extracted a yellowish substance from milk (1. ). The significance of this pigmented substance was not understood at the time and very little further information was learned about riboflavin until the 1920’s when there was a strong movement to understand dietary needs and requirements, especially those involving vitamins. By the 1920s it was known that two common diseases, beriberi and pellagra*, were caused by the deficiency of a dietary factor known as water soluble vitamin B found in milk, yeast, and liver.

Exposing vitamin B to high temperatures rendered it ineffective in curing beriberi yet it still relieved the symptoms of pellagra, leading scientists to believe that vitamin B was composed of more than one substance or factor. In the mid-1920’s vitamin B was categorized into vitamin B2 (thiamine), which was not thermostable but could cure beriberi, and vitamin “B2” which could cure pellagra and was heat stable. Characterization of vitamin “B2” was difficult and confusing because, unbeknownst to researchers, the factor known as vitamin “B2” was actually a compilation of 4 different vitamins. In 1933, Kuhn, Gÿorgy, and Wagner-Jauregg at the Kaiser Wilhelm Institute had a breakthrough while isolating vitamin “B2” from different sources. They observed a positive correlation between the strength of the yellow/green fluorescent pigmentation of an extract and the growth of experimental rats deficient in vitamin “B2” that were receiving the extract. The pigmented substance was isolated and called lactoflavin or ovoflavin, depending on the source of the substance, and later named riboflavin or vitamin B2 because it was the first of the “B2” complex vitamins to be characterized. Further research revealed three other components of the original “B2” complex: niacin (B3), pyridoxine (B6), and pantothenic acid (B5) (2,3). (The isolated pigmented factor, riboflavin, did not cure pellagra and it was later found that pellagra is caused by a deficiency in niacin.)

Since the 1930’s, riboflavin has been found to be involved in a variety of biological processes, such as aerobic metabolism, redox reactions, hormonal equilibrium, iron mobilization, signal transduction, biological clocks (circadian rhythms), DNA repair, homocysteine metabolism, and fetal development. 3,7,10,6. Riboflavin is central to mitochondrial energy production and, therefore, deficiencies in riboflavin can have serious health consequences (7). Current research is focusing on the importance of riboflavin in cancers and cardiovascular disease.

*Beriberi is caused by a deficiency in vitamin B1 (thiamine) and symptoms include fatigue, weakness in limbs, abnormal eye movements, cardiovascular issues, vomiting, pain, and mental confusion 4. Pellagra is caused by a deficiency in B3 (niacin) and symptoms include delusions, mental confusion, diarrhea, skin sores, and inflamed mucus membranes 6.

Riboflavin, in its purest form, presents as orange yellow crystals but it is most bioavailable in the enzyme bound form of Flavine Adenine Dinucleotide (FAD) and Flavine Mononucleotide (FMN). In these forms, it acts as a redox agent in cellular metabolism (6,7).

Riboflavin is heat stable but light sensitive and water-soluble so there are quite a few ways in which handling food can result in the degradation or loss of riboflavin. Leaving a glass bottle of milk in the light for a day can result in an estimated 50% loss of riboflavin. Irradiation for sterilization of foods can also decrease the amount of riboflavin by an estimated 10-15% in foods due to the creation of reactive oxygen species that will bind with FAD and FMN. During cooking, riboflavin can leach from food into cooking water or meat drippings resulting in lower consumption. Additionally, not all riboflavin sources are equal in their accessibility to be metabolized an absorbed. Riboflavin is usually more bioavailable when consumed from animal sources because plant riboflavin is covalently bound into larger complexes making it inaccessible for metabolism. Absorption rates are dependent on an individual’s riboflavin levels and will increase when an individual is deficient, absorption rates will also increase in the presence of bile salts and psyllium gum (3,9).

FAD and FMN (enzymatically bound forms of riboflavin) are responsible for many complex reduction and oxidation reactions in human metabolism. Riboflavin is a necessary intermediate for carbohydrate and amino acid metabolism, and also acts as an antioxidant to provide some protection from oxidative stress and free radicals (3,7,10). Once taken up through the intestines, riboflavin is incorporated into an enzyme bound form (FAD and FMN) in tissues where it facilitates many complex oxidation and reduction reactions including a reaction in the citric acid cycle and the electron transport chain. Conversion of riboflavin into FAD and FMN is largely controlled by endocrine glands such as the thyroid and the adrenal cortex. Riboflavin deficiencies can lead to changes in endocrine glands and hormone function, which in turn, could influence riboflavin metabolism and availability (8). Hormone levels dictate the conversion of riboflavin into FMN and FAD, the concentrations of riboflavin in tissues, and how much riboflavin is excreted out through urine (8). Excess riboflavin is excreted through urine as free riboflavin and little is stored in the body that hasn’t been bound up in tissue. The greatest concentrations of riboflavin are found in the liver, kidney, and heart in the form of FAD and FMN and the highest concentrations of free riboflavin are found in retinae, urine, and milk. There is enough total stored riboflavin in the body to last an estimated 2-6wks without external riboflavin consumption (3).

Individuals at Risk for Deficiency:

Most deficiencies are a result of poor diet and low intake of foods containing riboflavin. People who do not have access to foods containing riboflavin are at risk for deficiency. Some groups that tend to have low riboflavin levels are adolescents 15-18 who often have low milk intake, pregnant women and infants in populations that have low dietary riboflavin intake, and elderly people (7). People with diseases of the liver, such as cirrhosis and hepatitis, might have decreased absorption of B2 and are at risk for deficiency.

Because riboflavin is water soluble, it does not accumulate in the body. Excess riboflavin that is not absorbed exits the body through urine. Possible side effects of taking high doses of riboflavin are diarrhea and increased urine production 3,7.

A study published by Schoenen et al., 1998 in Neurology, demonstrated that taking high quantities of vitamin B2 could be used as prophylaxis for migraines. Over the three-month duration of the study, a significant number of patients who received 400mg/day of riboflavin experienced a reduction in the frequency and length of headaches. Because riboflavin has very low toxicity, is inexpensive, and effective, it is a promising alternative option for migraine management 12.

There is some evidence that riboflavin is linked to certain cancers such esophageal cancer and cervical cancer. One study found that taking riboflavin along with niacin could reduce the risk of esophageal cancer 7. Another study found that riboflavin deficiency could be a risk factor for a precursor to cervical cancer (15). Other studies have shown that riboflavin deficiencies in rats with cancer can lead to some positive effects such as enhanced DNA repair machinery and negative effects such as increased DNA strand breakage (16). More research is necessary to determine the link between riboflavin and different cancers.

There is some evidence that riboflavin deficiencies can cause cataracts and night blindness. Evidence suggests that taking a combination of riboflavin and niacin will prevent cataracts but it is not clear whether riboflavin, niacin, or a combination of the two is necessary for prevention (13,7,10). More research is needed in this area.

Interaction with other B vitamins:

The Field of Epidemiology and the Importance of Infection Control

One Response to "Riboflavin (Vitamin B2)"