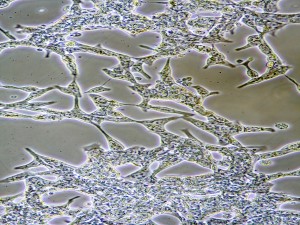 Cancer is one the leading cause of deaths worldwide with prostate cancer accounting for around 8 per cent of all the new cancer cases and 15 per cent in men. Despite recent advances in detection and treatment of prostate cancer, it still remains a leading cause of cancer death among men in the United States affecting one in every six men [1]. In some cases these treatments for early prostate cancer fail to cure the cancer causing it to advance leaving only its management as a possible solution. However gene therapy based strategies have recently generated some significant results in early-stage clinical trials, proving their safety and potential as an effective treatment option in conjunction with existing cancer therapies.

Even with the best available treatments, the median survival of patients suffering from advanced prostate cancer is only two to three years. This has necessitated the need to develop effective therapies for these patients. Driven by this need the researchers at VCU Massey Cancer Center and the VCU Institute of Molecular Medicine (VIMM) have developed a gene therapy based approach in combination with an experimental drug that targets a specific gene involved in cancer’s growth and is transported to site of action via microscopic gas bubbles. The study led by Dr. Paul B. Fisher uses a novel CTV (Cancer Terminating Virus) that replicates exclusively in cancer cells where it delivers its cancer specific cytotoxic payload. The payload here consists of a toxic cytokine gene mda-7/IL-24 as well as an experimental drug called BI-97D6 which targets MCL-1 and Bcl-2 gene family that protect cancer cells from therapeutic agents. This resulted in enhanced cancer cell death while sparing healthy prostate epithelial cells in the preclinical studies conducted on mice. Moreover, the effect of this therapy was not only limited at the primary tumor site but it was also able to kill cancerous cells in distant metastases through “bystander” effect resulting from protein secreted by mda-7/IL-24 gene [2].

In this study the Cancer Terminating Virus viz, Ad.tCCN1-CTV-m7, used is an engineered adenovirus in which the scientists removed the genes controlling viral replication and the ones that cause disease followed by addition of controlling element of a gene known as CCN1 in order to restrict the virus replication in cancer cells only thus ensuring target specific action. Furthermore the scientists modified the virus to deliver cell-death inducing gene called as mda-7/IL-24 which secretes MDA-7/IL-24 protein. This protein has been proven to prevent tumor growth via inhibition of angiogenesis i.e. blood vessel formation in tumors as well as inducing apoptosis or cell suicide. This gene has also been shown to exhibit synergism with existing cancer therapies. So in the present study a combination of mda-7/IL-24 gene along with BI-97D6 drug was used in order to increase cancer cell death while at the same time preventing the cancer cells from developing resistance against viral gene therapy.

The mode of delivery for this viral gene therapy is via a stealth delivery technique called as UTMD (Ultrasound-Targeted Microbubble Destruction) which utilizes minute, gas filled bubbles to allow site-and target-specific release of cytotoxic payload through ultrasound. This approach overcomes the problems associated with the traditional delivery approaches where the CTV upon being injected directly into the bloodstream gets trapped in the liver or is removed by the body’s immune system. Another advantage of this approach is that the whole process of delivering CTV to tumor can be tracked in real-time [3].

This approach has already been reported to be successful in preclinical experiments in prostate and colorectal cancer models. Thus, proving the efficacy of this combination treatment approach in preclinical animal models. But this study is still at a very early stage and its safety through toxicology and pharmacological studies needs to be defined before it can be tested on humans. The scientists at VCU Massey Cancer Center are now working to develop a different CTV expressing mda-7/IL-24 for treatment of patients suffering from recurrent brain cancer showing the vast application of this technique in treating other cancers besides prostate cancer. Based on these leads, the cure of metastatic prostate cancer has become a realistic goal and it won’t unreasonable to think that in future cancer may become a controllable part of our biology , gone the same way as tuberculosis to become something that can seriously harm a person provided the person does not have access to clinical medicine.

Lubna Ahmed Introduction1,2,3 Vitamin D is a nutrient that is produced within the…

Breaking The Mystery of Stem Cells

One Response to "Gene Therapy to eradicate Prostate cancer"