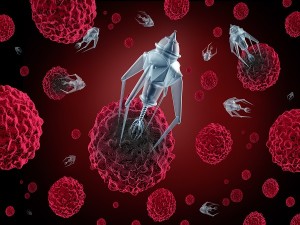 The past 20 years have brought an unprecedented increase in the accumulation of knowledge about cancer cells. The study of genomics has yielded a tremendous amount of data regarding the signaling cascades involved in cancerous cells. Yet, the increase in no. of deaths from cancer remind us that very less progress has been made in the clinical achievement of cancer. Moreover the therapies used so far remain essentially similar to the remedies used decades ago i.e. surgery, radiation etc. However, owing to the side-effects associated with these methods due to their non-specific action a no. of biochemical means have been discovered to treat cancer by targeting cancer-specific targets such as inhibition function, disruption of protein-protein interactions etc. These targeted therapies have made significant progress in recent years. Scientists at Dana-Farber Cancer Institute have devised a new and more potent form of targeted therapy for cancer treatment based on converting an inhibitor drug into a degrader drug in order to disintegrate the target protein rather than inhibiting it [1].

This study as posted in Science Express, uses a form of targeted therapy based on chemical technology to induce the protein-chopping machinery of the cancer cells against them in order to destroy and dispose of the proteins responsible for their growth. The study was carried out with the aim to develop inhibitors for undruggable proteins and overcome the drug resistance associated with cancer, a shortcoming associated with targeted therapies as they inhibit just one or few of the functions of these oncoproteins. Thus, allowing the targeted oncoprotein to adapt to the drug and find an alternate route for its growth.

The team tested this approach which they dubbed as “Degronimids” in laboratory samples of leukemia cells and in animals with human-like leukemia. The results obtained showed that the cancer cells died much more quickly than with conventional targeted therapies. This approach was able to selectively degrade three proteins out of a total of more than 7,000 in the entire cell making it a laser-guided system that effectively delivers the protein degrading machinery to targeted protein [2].

The study involved manipulating the cell’s natural protein-elimination system which provides disposal of used-up or unneeded proteins by a structure called Proteasome wherein they are grounded and recycled. These proteins are tagged for disposal by attaching a protein called ubiquitin by enzymes E1, E2, and E3 after which they are transported to Proteasome. The team harnessed the destruction power of this system by designing a chemical adapter that works like a tiny trailer hitch helping the attached drug molecule to bring the cell’s protein-degrading machinery to the protein of interest where upon binding the drug-protein-degrader combo demolishes the targeted protein. The team in their study used drug JQ1 which targets BRD4 protein which is responsible for expression of cancer growth genes. The adapter used here was a chemical derivative of drug of thalidomide viz, phthalimide which was designed to selectively bind to enzyme E3 called Cereblon.

The results of this study were astounding as the BRD4 protein in leukemia cells was degraded within an hour of providing the JQ1-and-phthalimide conjugate (dBET1). Thus, proving the ability of this conjugate to prevent the cancer cells from developing resistance against the drug. Similar results were obtained when this approach was tested in mice with aggressive and widespread form of human leukemia. The researchers also used JQ1 as a guidance system in conjugation with SLF (sublingual fentanyl) compound to target a protein called FKBP12. This system also showed rapid degradation of FKB12 proteins in cancer cells within a few hours of its application [3].

This approach has been reported to be successful in both laboratory and preclinical experiments in cancer models. Thus, proving the potency, selectivity, and rapidity of this approach. Based on these results, Dana-Farber researchers are now aiming to develop a derivative of dBET1 that can be used in human patients. Moreover this approach is being extended for other types of cancer and genetically-caused disease with both dBET1 and dFKBP12 compounds in the late stage of optimization for therapeutic development [4]. This approach has an upper hand over its predecessors as it targets the stem of cancer viz, oncoproteins which play an important role in drug resistance and cell self-renewal. Thus we can say that in the near future drug-induced proteolysis may become a universal remedy for all types of cancers and related diseases.

Aging and Anti-aging - A Telomere Trick

By Dr. Vaishali Kulkarni Telomeres are specific DNA-protein structures found at both ends of…

By Suchitra Chari, MS The human microbiome comprises of all the microorganisms and their genes…

2 Responses to "Degronimids to degrade Oncoproteins"