Aging and Anti-aging – A Telomere Trick 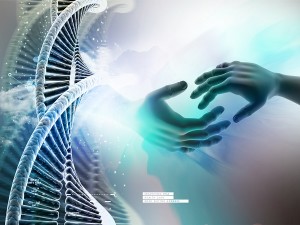 Telomeres are specific DNA-protein structures found at both ends of each chromosomes. They prevents the chromosome ends from sticking together and protecting chromosomes from degradation(1). The telomere regions are made up of repetitive nucleotide sequences. In vertebrates, the telomere sequence is TTAGGG and this sequences is repeated approximately 2,500 times in humans(2). Telomeres play a crucial role in retaining the integrity of genomic information. Yet, as a normal cellular process, a portion of telomeric DNA is lost at each cell division. After the telomere length reaches a critical limit, the cell undergoes senescence or apoptosis and dies. But then, if the telomeres are so crucial for the cell, why are they lost at each cell division? During DNA replication, the replication machinery – the enzymes that duplicate the DNA cannot replicate the DNA ends. Hence, at each replication and cell division, telomeres shortens progressively and eventually cells undergo cellular senescence(2). Interestingly, in some specific cases, an enzyme Telomere terminal transferase can add nucleotide sequences repeats to the telomeres(4). The telomere elongation process is highly regulated and occurs during the S phase into the M phase of cell cycle(5). A number of proteins have been associated with Telomeric DNA. However, six telomere specific proteins found at the telomere at any given point of time are TRF1, TRF2, TIN2, TPP1, Rap1 and POT1 which recognize the TTAGGG repeats(6).

Interesting enough, there is no one accepted definition of ‘aging’. However, for research purpose, we define aging as – a result of progressive and irreversible decline of capacities of organism to adapt to its ever changing environment. Aging can also be defined as a progressive decline of tissue functions eventually leading to mortality. The functional decline of tissues and organs is a result of loss of function of cells. Humans experience this age related functional decline in form of muscle weakness, memory loss and general inability of body to carry on normal functions. Nevertheless, it is more about the cells. Cellular aging also called as cellular senescence is a decline of cell function to such an extent that cell eventually stops to function and die. Extensive scientific data on cellular aging suggest that it is responsible for general decline of body functions and metabolism. Each and every cells in the body undergoes aging. Understanding the mechanism of cellular aging, can not only help us unfold the mystery of aging but also prevent age related diseases and conditions.

Telomeres attrition – A link to Aging

Telomere attrition, a unique characteristic of telomeres have been linked to various diseases and specifically with aging. It seems that the mystery of aging has its origin in telomeres shortening and rate of telomere attrition may indicate the pace of aging. Over a past few decade, studies focused on relation of aging to telomeres attrition has become significant in the scientific field. In 2009, a team of scientists even won the Nobel Prize in Physiology or Medicine for their breakthrough research into how the telomeres work.

Telomerase is considered as an anti aging enzyme. The stem cells, the proliferating population of the body, contains high levels of telomerase which prevents shorting of telomeres. In humans, liver and gastromucosal cells have been reported to lose 55 base pairs of telomeric DNA per year(7). Therefore, the telomere length may be used to predict the normal life span of normal, healthy functioning cells. Cawthon and his team has reported that individuals with shorter telomeres have significantly poor survival rate and mainly attributed the high mortality rate to heart disease and infectious diseases(8). Progressive shortening of telomerase leads to senescence, apoptotic death or might modify the somatic cell into oncogenic cells. Interestingly, some scientist claim that telomere length might determine the overall life span and aging rate of an individual and is affected by various lifestyles factors such as tobacco smoking (9).

The controversy about age extension and anti aging supplements seems to be never-ending. Few clinical trial reports are available to debate the use of anti-aging supplements. One such study in 1993-98 in Finland on a group of 522 individuals (ClinicalTrials.gov NCT00518167) with impaired Glucose Intolerance test and two samples of telomeres lengths did not indicate a clear correlation of telomere length and age. The clinical data indicated the there was no inevitable telomere shortening due to cell division suggesting the process of aging is much more complicated and cannot be completely attributed to telomeres shortening(10). Another clinical study of 50 individuals analyzed the relative telomere length(RTL) over the period of six months. The study report states that changes in individual RTL per month were pronounced than the changed recorded in a 10 year study conducted by the same team of scientist(11). The 10 years study on 957 individuals reported the expected age related decline in telomere length. However, approximately, one third of the individuals exhibited stable or increased telomere length over the decade. The individual telomere shortening rate was significantly negatively correlated with the initial telomere lengths and indicated that individuals displaying the longest telomeres at baseline showed the most rapid telomere shortening over time and vice versa (12). Yet another study, the so called OCTO and NONA longitudinal studies on elderly group identified a cluster of immune parameters strongly predictive of risk of early mortality, independent of the cause of death. This immune cluster consisted of a reverse of normal ratio of helper and cytotoxic T cells, reduced T cell proliferation potential and increased proportions of senescence T cells. The presence of senescence T cells in the immune cluster had been interpreted as a clinical confirmation of the significance of replicative senescence in human aging(13).

Many studies address the role of telomerase, a cellular reverse transcriptase(TERT) which is capable of compensating telomere attrition through addition of TTAGGG repeats onto the chromosome ends(14). Although, telomerase expression is detected in a number of adult cell types and adult stem cells, this is not sufficient to maintain the telomere length with aging in humans and also in rodents(15,16). The significant role of telomerase in tissue renewal and life span was best studied in telomerase deficient (Terc-/-) mice (15). These mice showed progressive telomere shorting which could be rescued by insertion of one copy of Terc gene. This gene expression restored the telomerase activity and rescuing the cell function and life span.

Anti-aging Pills- A reality or Controversy?

There has been raging controversies in the field of anti-aging research. Numerous scientific teams are evaluating the efficacy and authenticity of the ‘Anti-aging pills’.

Chemical structure of Cycloastragenol or TA-65.

The long wait time for the anti-aging pills seems to have ended and many anti-aging supplements are ready to lure the US market. Several anti-aging dietary supplements has made its way to the counters. One of them is Cycloastragenol (CAG), a potent telomerase activator. Chemically, it is an aglycone of astragaloside IV. It is a phytochemical from the plant Astragalus membranaceus. Valenzuela and team of scientist reported for the first time that CAG moderately increased telomerase activity and proliferative capacity of CD4 and CD8T cells. Their preliminary results suggested that this nutraceutical can inhibit the onset of cellular senescence (17). This compound made to the market in 2013 through T.A. Sciences who developed it as a product named TA-65. However, adequate evaluation of the efficacy of this compound through clinical trials and scientific research still needs attention. A study( group of 6 participants) was sponsored by RevGenetics and conducted by UCLA scientist. This study reported that TA-65 increased CD4 and CD8 T cells telomerase activity by 1.3-3.3 fold as compared to the controls in all the six donor cultures (18). These results are exciting but not quite convincing due to sample size. Report from rodents study suggest that CAG improved the health span by telomere elongation without impacting the longeitivity of the mice, both old or young adults(19). Similarly, in January 2007, a commercial health maintenance program called PettonProtocol-1 was launched which included TA-65 as dietary supplements for testing in human subjects. The reports of 37 subjects who completed 12 months of protocol was discussed. No significant increase in telomere length was reported . However, a significant reduction in the percent short telomeres was found, suggesting that TA-65 lengthened the critically short telomeres and remodels the immune system cells to reduce cellular senescence(20).

Nevertheless, the pharmacological potential of this compound still remains uncertain due to lack of sufficient clinical and scientific data and needs careful evaluation.

By IsharPal Singh, MS The past 20 years have brought an unprecedented increase in the…

One Response to "Aging and Anti-aging – A Telomere Trick"