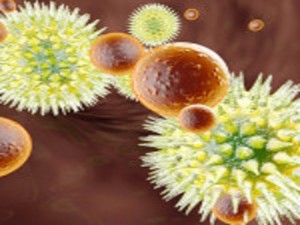 AIDS (Acquired Immunodeficiency Syndrome) is one the major public health concerns affecting more than 35 million people worldwide [4]. The conventional approach for treating HIV viz, HAART (highly active antiretroviral therapy) uses a mixture of compounds to suppress HIV-1 infection and impede AIDS development. But the problem lies in the fact that this therapy is unable to prevent the expression of viral protein and reactivation of virus in latently infected cells. Hence new strategies are needed to protect the genome against HIV virus.

Imagine a defense system that could prevent HIV infection, treat patients who have already contracted HIV, and even remove all the latent copies of the virus from those with the more advanced disease. It sounds like science fiction but researchers at Salk have developed a mechanism that acts like cellular scissors chopping up the HIV virus [3].

How HIV affects the Immune System?

Upon entering the body HIV binds to dendritic cells which then carry the virus to the surface of infected (CD4+) T cells in order to establish the infection. In case of any ordinary virus, the viral proteins are chopped up and combined with HLA proteins to which are then transferred to surface of the infected cells, establishing the infection. However, in case of HIV the virus accumulates mutation in its viral proteins. Thus, interfering with the binding process between viral & HLA proteins. Moreover HIV transforms the cell into HIV manufacturing factories by fusing their own genetic material i.e. a single-stranded RNA with the cells’ genome.

The conventional drugs for HIV treatment involve targeting individual steps of the viral life cycle; preventing the virus from fusing into cells’ DNA or stopping the affected cells from producing more viral particles. But the problem with these drugs is that they are unable to remove the latent copies of virus hidden within cells’ DNA. Moreover, the patients need to take drugs every day or every week for their whole lives in order to combat the latent HIV that may remain dormant for years. Thus, requiring a huge investment both in terms of money and time.

However, recently a new defense system i.e. CRISPR-Cas9 has been discovered that could be programmed to slice and destroy viruses inside human cells at specified spots. Thus giving it an upper hand over its predecessors in terms of specificity and efficiency.

The CRISPR-Cas9 technology is a molecular defense system developed by bacteria to protect themselves against viral infections by allowing them to cut up foreign DNA at specified positions. Ever since its discovery the researchers are devising new ways to use this system for gene editing. The CRISPR-Cas9 system used by researchers at new Salk involves using bits of genetic material called guide RNAs to specify the position of cuts on HIV virus upon binding to certain unique spots present on these viruses. Their study showed complete removal of virus from up to 72 percent of cells. Moreover the HIV that was hidden and dormant within the cells was also destroyed.

Another group at Harvard University have used this system to successfully edit the genomes of blood cells making them impervious to HIV infection. The group targeted the CCR5 gene that serves as the door through which HIV infects the cells. The researchers used CRISPR-CAS9 to splice out the CCR5 gene. Thus,making the cells HIV free [1]. Thus, proving that the CRISPR-CAS9 system works both before and after the virus is embedded in the genome.

Many companies like Novartis, Editas Medicines, CRISPR Therapeutics and others are working on this technology to develop promising therapies for various indications. Researchers across the globe are working on different CRISPR approach to “flush out” HIV as this method is likely to provide a cure for this disease. There is no doubt that all these companies will have promising candidates with very large potential markets.

The CRISPR-Cas9-gRNA technology platform is facile, versatile and improving rapidly [2], and clinical application is anticipated, in a broad range varying from simplifying research to acting as a new form of gene therapy for patients with HIV, cancer and genetic diseases. Although there are a number of challenges ahead before CRISPR/Cas9 technology can be used as a safe and reliable therapy, these challenges do not seem insurmountable. Research in this area of CRISPR/Cas9 is gaining speed and this system has the potential to offer permanent cure to several malignancies that we face today.

One Response to "CRISPR – Cas9 technology to eliminate HIV"