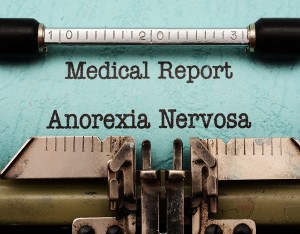 Anorexia Nervosa is perhaps the most well-known eating disorder, in part due to the celebrity of some individuals who have suffered and recovered from the disorder. This condition is complex, with behaviors and subtypes that may be expressed differently for each individual case. The following is a general overview of the diagnosis, symptoms, complications, risk factors, treatments, and some misconceptions about Anorexia.

As described in the DSM 5, the diagnosis of Anorexia relies on three main areas:

Low Body Weight: Limiting food intake which causes one’s body weight to be substantially lower than would be physically healthy; basically this is self-imposed starvation.1

“Low body weight” means around 15% below a normal and expected BMI for an average adult.2

Fear of Weight Gain: The ideas of gaining weight or getting fat tend to be regarded as worst case scenarios, and are deeply feared. This is a primary motivation for the individual taking steps to prevent any weight gain or to encourage loss of weight1.

Body Image: Individuals may also have a disordered and biased view of their own bodies, mostly or entirely focusing on “being fat” or areas of the body that are “too big.”

The individual also places a high priority on body size/weight, and assumes that one’s physical body (specifically how thin a person may be) reflects personal value and self-worth. They often see the ability to lose weight or maintain a low weight as a major success and source of pride1.

There are two main expressions of the disorder, both named quite clearly for their differences1:

The Restricting type: Individuals with this type tend to severely limit how much food they eat; they may or may not over-exercise.

The Binge-eating/purging type: Individuals with this type may binge (eat a lot of food in a small amount of time) and/or purge (different ways of quickly getting rid of body fluids, such as vomiting, using laxatives, diuretics, or enemas). This type of Anorexia does share some symptoms with Bulimia Nervosa, but the main difference between the two disorders is the degree to which binging behaviors occur compared to restricting behaviors: Most people with Bulimia tend to stay at a normal weight, while people with Anorexia tend to be very underweight1.

These two types are not rigid labels; a person with Anorexia may move from one type to the other, back and forth, etc1.

The Center for Eating Disorders at Sheppard Pratt offers a list of behaviors which might typically be seen in people with Anorexia, and which may be a helpful reference to concerned family members8:

To determine severity of each particular case, professionals typically look at how underweight the person is, specifically by looking at their BMI (Body Mass Index)1. The physical complications caused by Anorexia are numerous and involve the whole body. The majority of the physical complications can be reversed if the individual receives treatment and/or medical care5. Most commonly, individuals with Anorexia may suffer from:

Cardiovascular problems: Severe undernourishment can cause various heart-related problems, such as: Low blood pressure; abnormalities in heart rhythm (especially having an abnormally slow heartbeat); and at the most severe end of the continuum, heart failure6. The person may feel a lack of energy, feel tired most of the time, and/or feel body weakness7.

Physical Appearance issues: Besides losing body fat, the individual will also likely lose body muscle, which contributes to feeling weak 7. The hair and nails may become brittle, while the skin becomes dry and may grow “lanugo,” a light coat of hair6.

Gastrointestinal problems: Having slowed down the digestive system by not eating enough, extreme constipation can occur7. With the Binge-eating/purging type, erosion to the enamel of the teeth is likely, and a swelling of the salivary glands may be seen, as related to vomiting6.

Reproductive problems: If the individual is female, she may experience a loss of her period (Amenorrhea), or a delay in the start of her period7. Anorexia can contribute to infertility, as well as miscarriages and problems with pregnancy7.

A specific and direct cause of Anorexia is not known, but professionals can pinpoint some life and environmental factors that tend to go along with an increased risk of developing Anorexia. Some significant risk factors which can impact the development of eating disorders, as summarized by the National Eating Disorders Association are10 :

In addition, the DSM 5 lists the following as risk factors1:

People with Anorexia often work to hide their disordered eating and weight-related behaviors in an effort to continue restricting their intake without the interference of medical or mental health help2. The consequences of Anorexia can be severe, which necessitates treatment for many sufferers: Anorexia not only has the highest death rate of all eating disorders3, but also the highest death rate of all mental illnesses4. Often it’s the individual’s family and/or friends who initiate treatment.

Treatment itself may need to be multi-approach, depending on the individual’s level of need of care. Common available treatments include:

Inpatient Hospital Care10: Inpatient treatment (staying in a care facility overnight over a period of time) may be necessary to help the individual gain weight. Weight gain is the primary goal of inpatient care; it is important to note that even when some weight is restored, the person will still need treatment to work on the psychological components of the illness. Gaining back much-needed weight is only one step in the process of recovery.

Psychotherapies and Mental Health Care10: There are a multitude of counseling and mental health therapy approaches that have been shown to be successful with Anorexia – there is no single best approach. Commonly used therapies include:

What if someone doesn’t fit this diagnosis, but you know there’s still a problem?

It is important to note that there are many people with disordered eating behaviors who might not fit the descriptions of Anorexia or Bulimia, yet they still most definitely have an eating disorder. The DSM 5 has a classification named “Other Specified Eating and Feeding Disorders,” in an attempt to help professionals catch cases of eating disorders which do not fit neatly into either Anorexia or Bulimia7. As the Center for Eating Disorders at Sheppard Pratt states, it’s still important to seek help even if you don’t have Anorexia or Bulimia, because all disordered eating behaviors can cause legitimate and serious health problems7.

Myth: Anorexia only occurs in women.

Fact: It’s important to be aware that it’s not only women who suffer; Men and women both develop the condition. We know that Anorexia is significantly more common in women than in men, with about ten to fifteen percent of diagnosed cases in men7.

Myth: Anorexia only occurs in teenagers.

Fact: While the highest risk age group for developing Anorexia is between ages 15 to 192, the disorder is seen in all age groups7.

Fact: Anorexia occurs mostly in developed countries, but we don’t really know how often it occurs in lower-income countries. The disorder is multicultural – it occurs across cultures and ethnicities, although the expression and associated behaviors may differ depending on the person’s culture1.

An Introduction to Pharmacovigilance

By Meenakshi Bhamdi, B. Pharm We all are aware of the importance of medicines in…

One Response to "Anorexia Nervosa – A General Overview"