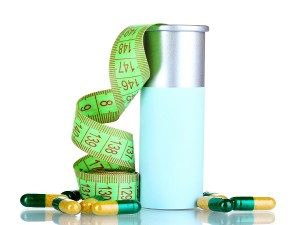 A few weeks ago, there was news regarding the death of a 21-year-old woman in the UK after taking physician-prescribed diet pills, which were suspected to contain 2,4-Dinitrophenol (DNP). Although the recent death of this young woman again reminds us that the use of weight loss or diet pills can potentially lead to fatal consequences, why is there still so many out there taking these pills? How many kinds of diet pills are there? What do they contain? How do they work to achieve weight loss? It is my goal in this article to provide some insights. For simplicity, weight loss or diet pills may be used interchangeably in the following sections.

The market for these pills

According to a study published in 2014 [1], about 35% of adolescent females with healthy weight actually self-describe as overweight, with 66% of them planning to lose weight and 8% of them reporting the use of measures such as diet pills. Women are not alone in this battle of self-image – men are increasingly becoming more concerned with their body image and there is now heightened awareness of eating disorders, excessive exercise, and extreme dieting in males. Clinically meaningful weight loss is generally defined as a decrease of 5% or more in body weight, which is enough to lower the risk of obesity-related diseases such as cardiovascular disease, diabetes, and others. Generally, weight loss pills tend to work by one of the following mechanisms:

History of these pills

For more than a century, there has been a wide range of weight loss regimen combinations that can supposedly suppress appetite. Amphetamine, which was discovered to have anorectic (appetite suppressing) effects in the 1940s, generated a huge interest in the pharmaceutical industry. At the time, the main goal of these pharmaceutical firms was to maximize the anorectic effects of amphetamine and minimize its adverse side effects by combining different ingredients such as amphetamines, diuretics, laxatives, and thyroid hormones, which are effective in causing weight loss, with ingredients such as benzodiazepines and antidepressants to minimize common side effects such as anxiety. As a result of the various marketing campaigns for different combinations of weight loss pills using brightly coloured tablets and capsules, these pills were often referred to as “rainbow diet pills”.

Rainbow diet pills soon sparked concerns within the academic and public health communities, who became increasingly aware of their related adverse effects including stroke, heart failure, and electrolyte abnormalities [2]. Worse yet, the use of these pills were linked to accumulating deaths and injuries, which eventually led to their removal from the market by the US Food and Drug Administration (FDA) in the late 1960s. However, they soon made their way to the market in Spain and Brazil in the 1980s and 1990s. Better yet, they have made their way back to the US market today by being marketed and repackaged as access to self-medication and “natural” or “herbal” dietary supplements as a consequent of the 1994 Dietary Supplement Act, which does not require dietary supplements to be proven safe and effective before entering the marketplace [3]. Today, many weight loss or diet “supplement” pills are readily available for the consumer at the local pharmacies, online, and by person-to-person sales, without being prescribed by a professional doctor. At the same time, there are some prescription weight loss drugs that do have to meet health agency regulations and are usually prescribed to obese patients whose BMI is 30 or higher, as well as patients with a BMI of over 27 if they are diagnosed with metabolic abnormalities such as diabetes or high blood pressure.

Just like any other prescription drugs, the use of weight loss drugs is accompanied by common side effects. In this section, we will describe some commonly prescribed weight loss drugs, how they work and their side effects. If you are being prescribed these drugs, it is imperative that you discuss with your doctor about your medical history including possible allergies, other medicines or dietary supplements that you are taking, whether you are planning to get pregnant, or that you are already pregnant or breastfeeding.

Orlistat. The traded name for orlistat is Xenical. The way it works is by blocking absorption of about one-third of the fat you consume. Common side effects of this drug include abnormal bowel movements, usually having more bowel movements and not being able to control them, having oily stool, passing gas, and abdominal cramps. More rare side effects may include liver injury. When you take orlistat, it should be noted that you should already be on a low-fat diet and you must take multivitamins containing vitamins A, D, E, and K, as orlistat makes it difficult for the body to absorb these particular vitamins.

Belviq. This drug works by suppressing your appetite and promotes a feeling of fullness or satiety. Common side effects usually occur in people who have diabetes, and they include low blood sugar, headache, back pain, cough, and fatigue. For those who are also taking anti-depressants, some rare but serious effects including fever and confusion may occur. Women who are planning to get pregnant or are already pregnant should not take Belviq.

Contrave. This drug contains the combination of naltrexone and bupropion as its main ingredients, which are used to treat alcohol/opioid dependence and depression, respectively. Mixed together, Contrave helps manage weight-related issues in obese patients. However, common side effects associated the use of this drug include nausea, vomiting, diarrhoea, constipation, headache, dizziness, dry mouth, and insomnia. More serious side effects include abnormally fast heart rate, high blood pressure, seizures, abnormal vision, liver problems, and skin reactions. It has been reported that some younger people have suicidal thoughts when they are first exposed to Contrave. Do not use Contrave if you are planning to get pregnant or are already pregnant and breastfeeding. Do not take this drug with a high-fat meal as this may more easily cause a seizure. This drug is not approved for use by anyone younger than 18.

Saxenda. This drug is actually similar to the drug Victoza, which helps treat type 2 diabetes, but has a higher dose. It works by tricking your brain to think that your stomach is full, thereby resulting in weight-management effects. Common side effects associated with the use of Saxenda include nausea, constipation, vomiting, diarrhoea, lower blood pressure and increased appetite. There are also serious side effects, which include increased heart rate, inflammation in the pancreas, kidney disorders, gallbladder diseases, and suicidal thoughts.

Phentermine. Sold under the names Adipex or Suprenza, this drug curbs your appetite and is only approved for short-term (a few weeks) use. The use of this drug is associated with some serious side effects such as high blood pressure (that can cause palpitations), restlessness, insomnia, tremor, dizziness, shortness of breath, and chest pain. Some other not-as-serious side effects are dry mouth, diarrhoea, constipation, unpleasant taste and vomiting.

Qsymia. This drug, like phentermine, also curbs your appetite. In fact, Qsymia contains phentermine and topiramate (a seizure/migrane drugs). Topiramate can also have effects on weight loss by tricking you to feel full, or tasting less of your food, and burning more calories. Some serious side effects that occur when taking this drug include elevated heart rate, suicidal thoughts, and eye problems. As a result, women who are pregnant or planning to get pregnant should not take this drug. Other common side effects are dry mouth, a change in sense of taste, constipation, dizziness, tingling hands and feet, and insomnia.

Alli. This is really a non-prescription version of Xenical listed above, but at half its dose. It works similarly to the way Xenical does, and has the same side effect as Xenical. It works by inhibiting the breakdown of fat so there are fewer calories absorbed from the fat.

Garcinia Cambogia Extract. The active ingredient in the skin of a fruit called garcinia cambogia makes up this diet pill. This fruit is a green fruit that is shaped like a pumpkin. It works by reducing food cravings and inhibiting a fat-burning enzyme in the body which helps reduce the rate of fat-burning. While there are no serious side effects with the use of this drug, a minor side effect could be digestive problems associated with the use of garcinia cambogia exract. A review combining the results from 12 studies found that there was an average of 2-pound weight loss after taking garcinia cambogia extract over a several weeks [4].

Hydroxycut. One of the most popular weight loss supplements, it contains plant extracts and caffeine that help with weight loss. Side effects associated with this supplement may be anxiety, jitteriness, tremors, nausea, diarrhoea, and irritability. It is recommended that Hydroxycut should not be taken by anyone under the age of 18.

Glucomannan. This is also called konjac, and is fibre found in the roots of elephant yam. This supplement works by absorbing water and staying in the gut to signal you to feel full so that you would eat less calories [6]. When combined with a healthy diet, glucomannan has been shown to help people lose 8 to 10 pounds in 5 weeks [7]. In addition to weight loss, glucomannan can also lower blood sugar, cholesterol and triglycerides [8]. As it is a type of fibre, glucomannan can also help combat constipation. Side effects associated with this supplement include bloating and soft stools.

Meratrim. This supplement combines two plant extracts that make it more difficult for fat cells to multiply, decrease fat cell absorption of fat from the bloodstream so that stored fat is burned more easily. Only one company-sponsored study showed that 8 weeks of Meratrim caused weight loss of 11 pounds and about 12 cm off the waistlines. The results were also associated with lower blood sugar, cholesterol, and triglycerides. No major side effects have been reported.

Conjugated linoleic acid. This supplement reduces appetite, increases energy metabolism, and stimulates body fat breakdown [10]. However, no long-term weight loss effects (more than 6 months) were reported with the intake of conjugated linoleic acid supplements [11]. In addition, there may be side effects including digestive issues, which may cause fatty liver, inflammation, and insulin resistance in the long run.

An important note on DNP

DNP, or its long form, 2,4-dinitrophenol, is an organic compound that has been abused in dieting, and has been linked to severe side effects that had even led to deaths in some instances. It was extensively used from 1933 to 1938, but was removed from the market after many people became ill or even died from it.

DNP, unlike other compounds used to burn fat and build muscle, does not have any other medical use. In fact, DNP is primarily used in the manufacturing process of dyes, wood preservatives, photographic developer, pesticide, and even explosives [12]. DNP can inhibit energy production in most cells, making energy production less efficient, and expel excess energy as heat, thereby burning up to 50% more calories. However, DNP has serious effects on living cells. Since it generates excess energy as heat, overdose of DNP can cause an excessive rise in temperature, leading to fatal hyperthermia (up to body temperature of 44°C)! In line with this, acute ingestion of DNP in human at about 20-50 mg per kg of body weight can lead to fatality in human [13]. In addition, ingestion of DNP as supplements has been associated with side effects such as allergic reactions, insomnia, carbohydrate cravings, constant sweating, rapid breathing, lack of energy, and dangerous side effects such as cataracts [14], irregular heartbeat, and may even cause cancer in the long run as DNP is carcinogenic.

Having realistic expectations with weight loss