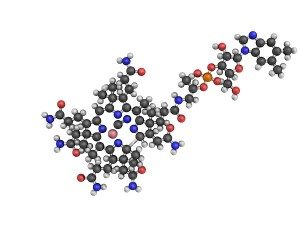 INTRODUCTION OF VITAMIN B12

Vitamin B12 is one of the nine water-soluble B vitamins. It is also known as cobalamin or cyanocobalamin as it contains cobalt, the essential trace element to all animals. Methylcobalamin and 5-deoxyadenosylcobalamin are other forms of this vitamin that are active in human metabolism (1–2).

Monot and Murphy first reported Vitamin B12’s effectiveness for the treatment of pernicious anemia, a fatal disease where body cannot produce red blood cells due to deficiency of this vitamin. Thereafter it was isolated in crystalline form from the liver by Folkers and Smith in 1948. Its structure was then determined by the crystallographic work of Noble laureate Dorothy Hodgkin in 1956. (3) Another Noble laureate Robert Woodward synthesized this vitamin in the laboratory in 1971.

The structure of vitamin B12 is based on a corrin ring having cobalt in the center. Four of the six coordination sites are corrin ring, the fifth one is dimethylbenzimidazole group, the sixth one is the center of reactivity which is variable, can be cyano or hydroxyl or a methyl or a 5’-deoxyadenosyl group to yield four different forms of this vitamin i.e.

Vitamin B12 is naturally found in animal sources such as meat, beef liver, fish, poultry, eggs, milk and dairy products. However, fortified breakfast cereals are good sources of Vitamin B12 and thus ideal foods for vegetarians. Some nutritional yeast products also have this vitamin.

RECOMMENDED DIETARY ALLOWANCES [RDAs in micrograms (µg)] FOR VITAMIN B12 (2)

Most importantly, as 30% of older individuals (>50 years) may poorly absorb vitamin B12 from their diet, they should receive either foods fortified with this vitamin or supplements to meet their daily requirements.

WHO ARE AT RISK FOR VITAMIN B12 DEFICIENCY

DEFICIENCY OF VITAMIN B12

Since it is a water soluble vitamin the excess amounts could be readily excreted in the urine and no toxicity reports have been detected.

VITAMIN B12 AND HEALTH

Taking supplements of vitamin B12 is effective for the treatment of this red blood cells disorder.

Vitamin B12 deficiency leads to accumulation of homocysteine level in the blood and strong association between elevated levels of homocysteine and incidence of Alzheimer’s disease and dementia has also been reported . However, further research is needed to show that this vitamin has independent effect on cognitive function.

Elevated levels of homocysteine, the sulfur containing amino acid derived from methionine, has been identified as a potential risk factor for cardiovascular

For the treatment of cyanide poisoning, US Food and Drug Administration (FDA) approved the use of hydroxocobalamine.

Report shows that vitamin B12 with folate and vitamin B6 might prevent the age related macular degeneration.

Vitamin B12 rich drinks are also given to athletes to boost up performances by correcting fatigue and weakness.

USE OF VITAMIN B12 DRINK IN SPORTS OR TRAINING

This vitamin functions as a cofactor of two enzymes, methionine synthase and L-methylmalonyl-CoA mutase. The first enzyme catalyzes the formation of methionine from homocysteine and methionine is essential in the formation of S-adenosylmethionine, which in turn is involved in the synthesis of DNA, RNA, hormones, proteins and lipids. The second enzyme, L-methylmalonyl-CoA mutase catalyzes an essential biochemical reaction in fat and protein metabolism as well as hemoglobin synthesis . Hemoglobin of blood carries oxygen to different parts of the body. In this way, vitamin B12 is supplying energy as well as oxygen to the athletes and is a good choice for them to replenish the depleted energy after strenuous workout or sports.

This tutorial covered information on who a Genetic Counsellor is, what do they do and…

Taking a BiTE® out of Cancer

By Isharpal Singh, M.S. The Next Gen approach in Immunotherapy The era of modern…

One Response to "Vitamin B12"