Introduction: What is the Mediterranean diet? 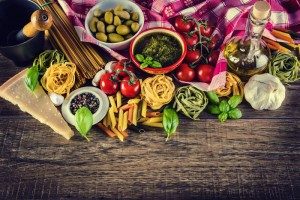 The Mediterranean Diet is currently thought of as the paradigm for healthy eating. The World Health Organization states that adopting the Mediterranean diet can prevent the onset of disease and improve the standard of living.7 Recent studies have documented that routine adherence to this diet can potentially delay chronic diseases including, cardiovascular disease (CVD), cancer, Parkinson’s and Alzheimer’s.5

It is widely accepted that a true, healthy diet consists of ample fruits and vegetables, so what is different about this particular diet? The Mediterranean diet is based on the traditional eating patterns of the Southern Mediterranean regions including Italy, Greece, and Spain5. The points below create this wholesome and nutritious diet.

This short excerpt will report the benefits of the MD on CVD and cancer risk with an account of scientific evidence from recent studies.

Approximately 610,000 people die from heart disease every year making CVD one of the most prevalent causes of death in the United States4. These deaths are preventable with lifestyle modification: following of a healthier regimen and an increase in physical activity. CVD is a chronic disease that is caused by plaque buildup in arterial walls, gradually leading to the prevention of normal blood flow because of narrowing arteries.3

This process is referred to atherosclerosis3. The increased availability of scientific evidence in this field suggests a Mediterranean Diet can mitigate incidences of CVD. One such research cohort study assessed the relationship between adherence to MD and occurrence of a cardiovascular event in 13,609 participants, of whom 60% were female, and were followed over a course of 4.9 years.6

Participant diets were assessed at baseline using a traditional food frequency questionnaire, adherence to the diet was measured using a 9-point scale (>6 score: high adherence and 6 It was concluded that participants with the highest adherence score displayed a lower CVD risk compared to those with lower adherence scores.

There is no doubt that consuming such a diet has a positive impact on health; its effects extend to metabolic syndrome and neurodegenerative diseases. Its role in neurodegenerative diseases has been linked to compounds like polyphenols and its derivative oleocanthal which are present in the diet in large amounts and contribute to a decrease in oxidative stress and inflammation.5

Although such results have been documented, this particular study is inconclusive because its sample size consists of university graduates who are likely to be more knowledgeable and not representative of the general population.

Additionally, the PREDIMED trial, a randomized clinical trial, goes further to claim that a Mediterranean Diet supplemented with either extra virgin olive oil or nuts and a controllow-fatat diet) decreased systolic blood pressure, but only the MDs resulted in a clinical reduction in diastolic blood pressure over a period of 4 years.5

Furthermore, in a more recent PREDIMED sub-study, the MD diet supplemented with nuts displayed a drastic decrease in the number, size, and concentration of small and large LDL particles. Both MD intervention groups (olive oil and nuts) increased the concentration of HDL; these results demonstrate that MD can modify the lipid profile over time.5

This data is promising because hypertension and atherosclerosis, both risk factors of CVD, can be prevented with dietary changes, enhancing overall heart health.

According to the Center of Disease Control (CDC), colorectal cancer (CRC) is the second type of cancer killer in the United States.2 The CDC has reported that 51,516 people have lost their lives to CRC in the US in 20122. Because it has been associated with an unhealthy diet, it remains a tremendous problem in Western societies as palatable, high fat and sugar foods are readily available.2

It is the role of healthcare practitioners to encourage individuals who are >50 years to go for routine screenings and the role of scientific researchers to spread awareness and educate on ways to reduce cancer risk. Research studies posit that the correct ratio of omega 6 and omega 3 fatty acids and high content of fiber, antioxidants and polyphenols from fruits vegetables, olive oil and wine present in the MD can alleviate the risk of cancer.5

Even though, its advantage to health is well established; the breadth of scientific evidence to explain the mechanism by which it contributes to good health is still scarce. A recent in vitro study specifically looked at lycopene, capsaicin, polyphenol and resveratrol, all of which are important components comprising the MD, and are derived from tomatoes, red chili peppers, olive oil, and wine, respectively.8

These components have anti-proliferative and apoptotic properties and decrease cell growth during cancer development, but the mechanisms and pathways that are mediated vary.8 Olive oil phenolic compounds are associated with reducing the expression of COX-2 and Bcl-2, both proteins that are essential in colon carcinogenesis.8

Because several carcinomas including CRT have been linked to an increase of fatty acid synthase (FAS) activity, the effects of specific phenolic compounds like oleuropein (OT) and hydroxytyrosol (HT) on FAS activity were investigated.8They found that both polyphenols hinder growth and expression of FAS in the HT-29 cell line.

This demonstrates that phenolic compounds are capable of reversing the molecular and enzymatic changes that occur with cancer progression. Capsaicin directly influences the process of metastasis and angiogenesis by interfering with a specific pathway that activates nuclear transcription factor kappa-B (NF-kB). NFkB is involved in the expression of genes that are active upon tumor development: cyclin D1, apoptosis suppressor proteins, Bcl-2 and Bcl-XL, and adhesion molecules, matrix metalloproteinases (MMP), and vascular endothelial growth factor (VEGF).8

This is one pathway in which capsaicin directly influences the induction of genes; however, there are several molecular pathways and mechanisms initiated by capsaicin on CRC cell lines that are beyond the scope of this review.

Lycopene has been implicated in scavenging oxygen radicals leading to a decrease in oxidative damage in human colorectal adenocarcinoma cell line (HT-29).8 Additionally, lycopene augments the activity of antioxidant response element (ARE) by heightening enzymes like superoxide dismutase, glutathione S-transferase, and quinone reductase that function to protect cells from oxidative damage.8

Furthermore, resveratrol which is found in high concentrations in red wine has cancer fighting properties: interference with cell growth, initiation of cell apoptosis, and inhibition of cellular proliferation.8 Although the evidence to explain the exact mechanism of how cell apoptosis is initiated is lacking, studies are claiming that low to moderate doses of resveratrol in HCT116 cells induces Bax-mediated and Bax independent mitochondrial apoptosis.8

Inhibition of cellular proliferation in cancer cell lines occurs by interfering with the S-G2 cell cycle.8 Interestingly, resveratrol and quercetin (RQ), an antioxidant, have a synergistic effect causing the production of ROS to be decreased by 2.25 fold and the antioxidant ability to increase by 3 fold in HT-29 cells.8

This in-vitro study evaluating the beneficial effects of the MD can provide insight about how molecular mechanisms in the human body function during cancer progression. It is vital; however, that more studies are conducted to comprehend how these components collaborate to modulate these pathways, genes, and proteins.