Telomerase to Turn Back Internal Clock 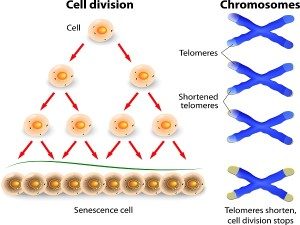 In Johann Wolfgang von Goethe’s famous play’s chapter Hexenküche (Witches’ kitchen) Faust, the protagonist poses the question of immortality to Mephistopheles to which the devil gives the following advice: Seek out a life of moderation, stop being lazy, exercise regularly by ploughing the field and avoid unhealthy foods! Faust the great scholar and scientist does not like manual labor and is quite happy with his current lifestyle, so he instead opts for plan B – a magic youth potion.

Nearly two centuries after this play was first performed, humanity’s quest for reversing the aging process continues with this magic potion being as elusive as ever. But technological advances have led to substantial progress in the field of aging research. Earlier the definition of aging depicted the age- related decline which happens at a whole body or organ such as memory loss or weakening of muscle strength. But now we know that aging also takes place in individual cells, a process known as Cellular aging or cellular senescence. A substantial amount of scientific data suggests that cellular aging plays a central role by causing exhaustion of cells to the point where cells can no longer divide and a disruption of normal cellular activity occurs leading to various age-associated diseases such as heart disease or cancer.

Role of Telomere Shortening in Aging

Telomere shortening has been ascribed as one of the central mechanism involved in the aging process. This is because these telomeres act as protective caps by providing repetitive DNA sequences at the ends of chromosomes. Thus, protecting the gene-encoding parts of the chromosome during DNA replication process. But every time a cell divides, these telomeres become shorter and when they are lost cells can no longer reproduce.

But at the same time whenever cells in a tissue are damaged then their neighboring cells or reservoirs of regenerative stem cells and progenitor cells have to kick in and replace the damaged cells. How do these cells keep on dividing and restoring the tissue, whereas other cells fade away?

The answer lies within these regenerative cells such as stem cells which are frequently called upon to divide. These cells have long telomeres due to high levels of telomerase enzyme which prevents the shortening of their telomeres. Thus, acting as an anti-aging enzyme.

Telomerase based Gene Therapy for Anti-Aging

The connection between cellular ageing and telomere length is rooted in solid research. Studies have shown that it is possible to lengthen the average lifespan of many species of many species like mammals, by acting on certain specific genes. Researchers have demonstrated that the mouse lifespan can be extended in adult life by a single treatment acting directly on the animal’s genes. And they have done so using gene therapy, a strategy never before employed to combat aging.

Although several reports have appeared over the years, each hailed prematurely as evidence of the life- and health-extending power of the enzyme. The most important of these studies have been a series of experiments by Maria Blasco which was based upon overexpression of the catalytic subunit of murine telomerase (mTERT) to the stem and proliferative cell pools of a wide range of epithelial tissues during embryonic development and continuing it throughout the lifespan of the mice (1,2). But this approach resulted in higher mortality of transgenic mice due to increased incidence of cancer and other diseases of excessive cellular proliferation caused by the intense mitotic pressure (and therefore, mutational risk) during embryonic development which had manifested itself in the early and middle years of the rodents’ lifespans.(3)

Some researchers might have ended their work with these animals on this unpromising note. But in 2011 telomere researcher Ronal DePinho’s group published a report suggesting the use of telomerase induction to delay age-related phenotypes in the same way as that had been postponed by mTERT overexpression but with reduced burden of cancer (4). Their approach differed from earlier studies as it involved providing treatment after the appearance of degenerative changes i.e. until middle age and beyond. The animals treated in this study showed reduced hepatic steatosis along with a better-preserved capacity for wound healing and hair regrowth. Moreover, no statistically-significant effects on tumorigenesis were observed in individual organs or in the organisms as compared to untreated animals. (5) This approach was further validated by Blasco’s group which also reported results suggesting the potential of late-life telomerase induction to ameliorate the degenerative phenotype of aging, even in wild-type mice using AAV9-mTERT based gene therapy (6). Moreover there was also a trend toward improved memory on the object recognition test. Thus proving the real potential of telomerase therapy in anti-aging.

Future of Telomerase based Gene Therapy

As with any breakthrough in the field of gerontology, we should not get too carried away as the treated mice did not live longer than normal, un-modified strains. Moreover the beneficial effects may be smaller or absent in humans due to the major differences in mechanisms of senescence and cancer- resistance between mice and humans. Also we still need to address mechanisms other than telomere shortening which lead to aging, such as genetic diseases, cancers, glycation, and oxidation etc.

However recently scientists at the Stanford University School of Medicine found a way to lengthen human telomeres by as much as 1,000 nucleotides by using modified messenger RNA. This newly developed technique has an important advantage over other potential methods i.e. it’s temporary as the newly lengthened telomeres
begin to progressively shorten again with each cell division after 48 hours. Thus, minimizing the risk of cancer in humans by preventing indefinite division of cells (7). This result is one of the most dramatic leaps made in recent years toward the dream of radical lifespan- extending medicine by providing means to prevent or treat diseases of aging. Thus, proving that life extension is nearing the border of science fiction and preparing to cross the border into science fact.