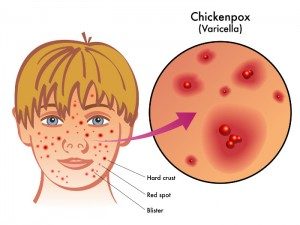 The shingles vaccine, sometimes referred to as the ‘shingles shot’ is often seen advertised in pharmacies and Doctors’ offices, leading patients to wonder if they should get the vaccine and what is it for. Shingles is the layman’s term for the Herpes Zoster Virus and the vaccine is used prevent the shingles from occurring.

WHAT IS THE HERPES ZOSTER VIRUS?

Herpes Zoster is the same virus that causes chicken pox, the varicella-zoster virus also known as the human herpes virus type 3. Chicken pox is known as the active invasive form of the virus, while the shingles comes from the dormant virus that suddenly becomes activated.

Scientists believe that when a person has chicken pox parts of the virus go into a dormant or inactive state in the neural ganglia in the spinal column and brain and remain there for years causing no problems until the virus suddenly re-activates and creates an active infection along the sensory portion of the involved ganglia.

HOW COMMON ARE THE SHINGLES?

95% of adults and 99.5% of people over the age of 40 in the United States carry the dormant shingles virus and are vulnerable to it becoming active and a full blown infection. It is important to remember that anyone of any age who has had the chicken pox virus is at risk for reactivation of the virus, the risk of it happening increases with age.

WHO’S AT RISK FOR GETTING THE SHINGLES?

WHAT CAN RE-ACTIVATE THE VIRUS?

What causes the virus to be re-activated is not fully known and understood at this time. The following are believed to be some reasons why it happens:

In extremely rare cases the herpes zoster virus may cause the patient to have meningitis or encephalitis. These patients will complain of headache, fever, seizures and change in mental status and when the spinal tap is performed the herpes virus is found in the culture.

IS THE SHINGLES CONTAGIOUS?

HOW ARE SHINGLES TREATED?

Children who develop the shingles usually have it resolve without any medical treatments. For adults the treatment way depend on the symptoms and their severity as well as any other medical conditions they may have.

Some patients may require hospitalization and additional more aggressive treatments.

DOES SHINGLE CAUSE LONG-TERM COMPLICATIONS?

Healthcare providers are always concerned when a patient comes in with shingles because there is a risk of the patient developing Postherpatic Neuralgia or PHN. PHN is defined as any pain that occurs 1 month to 6 months after the shingles rash is noticed. This pain can last for months or years after the rash and other symptoms have gone. It can be very difficult to treat. The goal of all healthcare providers is to treat the virus promptly and aggressively to prevent PHN from happening.

Studies show that the older the patient is, the greater the risk for PHN. One study showed that in patients who had pain for greater than 90 days, the PHN rate increasing as follows based on age:

PHN pain is often described as being intermittent and comes on suddenly, without warning or a precipitating cause and usually comes as a result of damage to the sensory nerves. Areas of the skin that usually are not sensitive to painful stimuli seem to be the most affected areas.

Patients who have PHN often say that the slightest touch or brush of cloth is painful and that their sleep and daily activities are changed. The persistent pain often leads to depression.

IS THERE ANY TREATMENT AVAILABLE FOR POSTHERPATIC NEURALGIA (PHN)?

There is no one single treatment that effectively treats PHN. Most treatments involve the use of topical medications that go directly on the skin as well as medication that is taken by mouth and into the blood stream.

Some of the topical agents include:

CAN SHINGLES BE PREVENTED?

The Food and Drug Administration approved a vaccine for in shingles in 2006. This vaccine, Zostavax, contains a live version of the virus that is found in the chicken pox vaccine given to children. The vaccine is approved for use in people over the age of 60, although it can be given to people between the age of 50 and 59 if deemed necessary by a healthcare provider.

Zostavax does not cure shingles once the virus becomes active. It is given as an injection and only one dose is needed. People who are pregnant, thinking of becoming pregnant, taking high doses of steroids or immunosuppressant medication or are allergic to neomycin should not get the vaccine. People who are going to receive the vaccine should be off any immunosuppressive medications for a minimum of 14 days, preferably one month, before receiving the injection.

IS THE SHINGLES VACCINE EFFECTIVE?

Studies have been done to determine the safety and effectiveness of the vaccine. One study was a double-blind placebo controlled study that involves 38,000 adults age 60 or older. This study showed that the vaccine

Another study was conducted over a 2 year period from January 2007 to December 2009 in 766,330 people ages 65 and older, representing a 5% random sample of people on Medicare. The results are as follows:

IS THE VACCINE COVERED BY INSURANCE?

The vaccine is fairly expensive usually costing a minimum of $160.00. If a patient has a Medicare Part D program and is over the age of 65, it will be covered as a prescription drug. A co-pay may still apply and be billed to the patient since Medicare Part D does not cover the injection in full. The healthcare provider may also charge a vaccine administration fee that is not covered by insurance. It is important to talk with the healthcare provider and insurance company before getting the injection.

By Perry McLimore, MD., JD. ELBOW The elbow is a synovial joint, which means the…