Repairing Myelin as an Element in the Treatment of Multiple Sclerosis 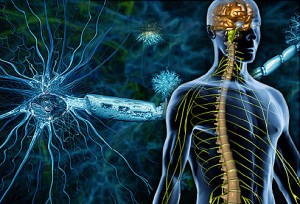 system invade and attack the central nervous system (CNS). A major target of this attack is myelin, the protective insulation surrounding axons (nerve fibers) that facilitates the rapid transmission of nerve impulses within the CNS and throughout the body.1 Without this myelin sheath, axonal function and survival steadily decrease with time.1 This gradual deterioration in neurological function, termed neurodegeneration, leads to the appearance of such symptoms as numbness, loss of balance, slurred speech, blurred vision, impaired mobility, and even paralysis.2

The clinical presentations or physical symptoms associated with MS are diverse and vary throughout the course of the disease. Relapsing-remitting MS (RRMS) represents 85% of all newly diagnosed patients and is the most prevalent form of MS.3 As its name indicates, RRMS is characterized by alternating periods of symptomatic flares (relapses) and complete or partial recovery (remissions). With time, RRMS patients experience a steady worsening of their neurological symptoms, marking their transition to a neurodegenerative phase of the disease known as secondary-progressive MS (SPMS).4 The other 15% of new MS patients are diagnosed with either primary-progressive MS (PPMS) or progressive-relapsing MS (PRMS).4 The disease process in PPMS and PRMS patients begins with a neurodegenerative phase, but PRMS patients experience relapses similar to those experienced by RRMS patients.4

Currently, disease-modifying therapies (DMTs) are the standard treatment for relapsing forms of MS; no FDA-approved treatment options exist for PPMS.5–8 DMTs act to restrain the overactive immune system and to prevent new immune-mediated attacks on myelinated axons. Although DMTs lessen symptom severity and increase the time between symptomatic flares, they do not halt the progression of neurologic disability, as DMTs do not improve the function and survival of demyelinated axons.9 To counteract progressive neurodegeneration, researchers are investigating whether stimulation of an MS patient’s myelin repair machinery remyelinates axons and restores axonal function.

Myelin repair is dependent on the actions of CNS-resident oligodendrocyte precursor cells (OPCs) and their descendants, oligodendrocytes.10 OPCs are recruited to the sites of axon demyelination, where they begin a differentiation program that leads to their maturation into myelinating oligodendrocytes. Once formed, the mature oligodendrocytes not only spirally wrap axons with myelin but also provide nutrients that support axonal survival (Figure 1).11,12

Figure 1. Demyelination and loss of myelinating oligodendrocytes leads to axonal degeneration in MS. (A)

Because of its ability to insulate, myelin allows the swift relay of information along the length of the axon, through the axon terminal, to either a neighboring neuron (nerve cell) or a target cell (eg, muscle cell). (B) When the axon is stripped of its myelin, as in MS, this relay is slowed, interrupted, or distorted. (C) In the absence of mature oligodendrocytes, which form myelin and provide nutritional support, axons are vulnerable to injury, degradation, and loss.

Examination of postmortem brain tissue from MS patients has provided insight into why remyelination is incomplete in MS. In studies that quantitated OPCs and mature oligodendrocytes at sites of demyelination, it was found that approximately 30% of the sites had reduced numbers of OPCs. The remaining sites, on the other hand, had normal numbers of OPCs, but these cells were arrested in an undifferentiated state.14,15 Together, these data suggest that the reduced capacity of MS patients to repair myelin is because of impaired migration of OPCs to the site of demyelination or because of impaired maturation of OPCs into myelinating oligodendrocytes.14–16

Identifying druggable targets in the myelin repair or remyelination pathway

To stimulate myelin repair or remyelination in MS patients, researchers are focusing on approaches that promote OPC migration, survival, and maturation. The past several years of research have produced a number of druggable targets, which fall into two broad categories: molecules that negatively regulate OPC function and molecules that positively regulate OPC function (Table 1).

Although several targets have been identified in the myelin repair pathway, only six of them have potential therapeutic drugs that are being evaluated in clinical trials (Table 1). Two prospective therapeutic drugs are antibody antagonists, which block the activity of Semaphorin 4D (Sema4D) and LRR and Ig domain-containing, Nogo receptor-interacting protein (LINGO-1), both of which are negative regulators of OPC migration and maturation.17–21 Treating rodent models of demyelination with either the anti-Sema4D antibody or the anti-LINGO-1 antibody resulted in significant increases in the number of OPCs at demyelination sites and in the extent of remyelination compared to control-treated rodents.18–19 The anti-Sema4D antibody is currently being tested for safety and tolerability in a phase 1 trial while the anti-LINGO-1 antibody demonstrated tolerability and is now being tested in a phase 2 trial for safety and efficacy.

Recombinant human IgM (rHIgM22) is another antibody in clinical trials as a potential therapeutic drug for myelin repair; however, it acts as an agonist, not an antagonist. rHIgM22 binds and activates platelet-derived growth factor receptor alpha, a cell surface protein that provides OPCs with a signal to proliferate or increase in number.37 In a virus-induced model of demyelination, rHIgM22 treatment significantly increased the level of remyelination (59.7%) in relation to control treatment (15.8%).36 Phase 1 trials are underway to evaluate the safety and tolerability of rHIgM22.

Another druggable target in the myelin repair pathway is acetyl-CoA carboxylase, a biotin-dependent enzyme that synthesizes the fatty acids needed to produce myelin.34 High-dose biotin (MD1003), through its ability to enhance myelin lipid synthesis in oligodendrocytes, improved neurological symptoms in almost 90% (20/23) of the MS patients enrolled in a small, open-label study.34,35 Because of these findings, MD1003 has moved to a phase 3 trial.

The last two potential therapeutic drugs for myelin repair are drugs that are already in use to treat other medical conditions. MRF-008 is a generic drug for hypertension whose target in the remyelination pathway has not been disclosed.29 MRF-008 will be tested as a remyelination drug in a clinical trial in partnership with the National Institutes of Health.29 The other “repurposed” drug is clemastine (Tavist), an antihistamine that blocks both histamine and muscarinic receptors and that is used to treat allergies. Clemastine was identified in a high-throughput screen of 1000 compounds for its ability to induce OPC differentiation and oligodendrocyte myelination in culture.25 Its ability to promote remyelination was also assayed in a mouse demyelination model. This experiment showed that clemastine-treatment significantly increased both the kinetics and the extent of remyelination compared to control treatment.25 The effectiveness of clemastine as a remyelination drug is currently being evaluated in a phase 2 trial.

The combination of innovative thinking and new technology has led to the discovery of multiple strategies to remyelinate axons in MS patients. Within the next five years, after the completion of the clinical trials, we will know whether these remyelination strategies halt and possibly correct neurodegeneration. Because all forms of MS share a neurodegenerative phase, the results of these clinical trials may lead to therapeutic options for all patients with MS.

This was my first session with Nepris, that covered basics of Genetics, Mendel’s Experiments…

Sleep: It’s Good for Your Health

By Joanne P. Shelby-Klein BSN RN Sleep, some of us think we don’t…