Pancreatic Cancer and Confronting the Diagnosis 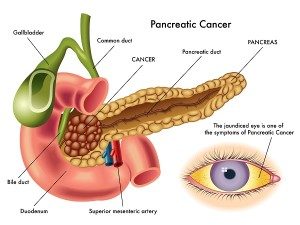 Receiving the diagnosis of cancer is life-changing for most patients. Some tend to come out of the trauma reasonably intact, others not so. For most, fear remains an important factor. This article is directed towards patients who have been diagnosed with pancreatic cancer. Knowledge of the causes, risk factors, and treatment strategies will be dealt with, as well as how best to overcome the fear of your diagnosis.

Pancreatic cancer is, as the name suggests, cancer that has affected the pancreas. The pancreas is an important organ in the body that is located behind the stomach, in the abdomen. Because of this deep location, tumors of the pancreas cannot be easily felt by pressing on the abdomen. So, it is not surprising that by the time, the tumour is fairly large, and symptoms begin to appear that it is detected, and by that time too late for surgical removal. The pancreas itself is a long tapering structure made up of a head, body and tail. The main functions of the pancreas depend on the two types of glands that make up the organ itself, so it has a digestive function (from the exocrine gland), and a hormonal function (from the endocrine gland).1The digestive juices secreted by the pancreas enable digestion of food once it has left the stomach on its way to the small intestines. The hormonal function is equally important as the pancreas produce the hormone insulin that helps in the regulation of blood glucose levels.

As mentioned earlier, most signs and symptoms only occur when the cancer is advanced. But the following commonly occur4:

Prevention is largely by getting screened if a family history is present. The American Cancer Society strongly recommends talking with a genetic counselor, nurse, or doctor qualified to interpret and explain the test results before proceeding with testing.

Tests and Stages of pancreatic cancer

Testing will include a blood test for tumor markers, an ultrasound test, imaging tests (CT, MRI, PET), and a laparoscopy (tube with a camera through a small cut on the abdomen, to obtain sample of the tumor). The results will stage the extent of pancreatic cancer as follows:

Stage I. Cancer is limited to the pancreas.

Stage II. Cancer has spread beyond the pancreas to nearby tissues and organs and may have spread to the lymph nodes.

Stage IV. Cancer has spread beyond the pancreas, such as the liver, lungs and the lining that surrounds the abdominal organs (peritoneum).

Staging the cancer is important because the treatment approach depends on the stage at which the cancer has been detected.

These include surgical treatment, radiation, and chemotherapy. Surgery is an option for patients with cancer limited to the pancreas, especially the head of the pancreas that causes jaundice and can be detected early. Sometimes surgery is carried out in advanced cases to relieve symptoms, but is not of a curative nature, called palliative surgery. Surgery is difficult for both the surgeon and the patient; the patient taking a long time to recover. Radiation therapy can be combined with chemotherapy and used in people whose cancers have grown beyond the pancreas, and when surgery is not an option. Radiation shrinks the tumor that helps relieve symptoms such as pain that is often associated with advanced cancers, or is considered as a treatment option in people who are too weak to cope with surgery. Chemotherapy involves taking drugs orally or through a vein (as an infusion) that kills cancer cells. The Eastern Cooperative Oncology Group (ECOG) has proposed looking at two promising schedules in pancreatic cancers:

Pain is a large part of pancreatic cancer further decreasing the quality of life of patients. Most patients will need treatment with opioids (or narcotics) available only by prescription that include morphine, oxycodone, or fentanyl. Non-opioids available over-the-counter are also frequently used, these include Tylenol, ibuprofen, Motrin, Advil and Aleve. In cases, when side-effects of the painkillers are not tolerated, pain control is done by nerve blocks, similar to women during labor.

Coping with your diagnosis of pancreatic cancer

Depression and fear are not uncommon among those given a diagnosis of cancer. It’s one thing to worry about being cured, and another to worry about recurrence. Patients with pancreatic cancer are probably told that the outcome (prognosis) is not always good, but this of course depends on each individual case. Remember to discuss this in detail with your own specialist, as he will be the best person to advise you regarding your own prognosis. People who are well-informed know how to cope better, and take decisions regarding the consequences of their illness. The extent of the symptoms carries a negative impact on the physical as well as psychological health. Anyone affected by cancer, including patients and their loved ones, need help dealing with their feelings. There are many pancreatic cancer organizations that specifically offer help and support to families and patients affected by this disease.

Counselors who deal with providing emotional well-being could also be contacted. Matters relating as to how the diagnosis will affect your job, personal life, finances, etc. must be discussed in detail. Physically, pancreatic cancer can drain your strength as a result of loss of weight. As mentioned earlier, the pancreas produces insulin and digestive enzymes. In case the pancreas has been surgically removed, you will need insulin injections and even enzyme and nutritional supplements. Since pain is very common in patients with pancreatic cancer, most patients with advanced cancer live with the thought of dying in pain. However, advanced techniques and drugs help most patients overcome pain. Finally, keep in mind you are not alone. One in three of us will face a diagnosis of cancer in our lifetime. Do not hesitate to seek professional help where there is someone fully trained to attend to your needs.

One Response to "Pancreatic Cancer and Confronting the Diagnosis"