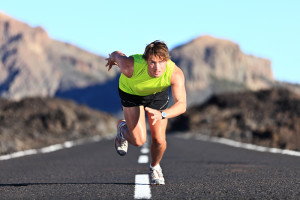 High-energy demand during high intensity exercises requires a proportionate increase in bodily energy supply. High-energy exercise (HIE) is an exercise where the intensity of exercise exceeds corresponding maximal oxygen uptake (called aerobic power or VO2max)by the body. Anaerobic exercise is a high intensity exercise, which is fueled by cellular energy production in the form of adenosine triphosphate or ATP (a component that serves as energy source of cells).Anaerobic process covers a substantial part of ATP requirement and it typically lasts for at least 1-2 minutes. However, with training, it can be extended up to 7 minutes during short-term maximal exercise. In sports that include explosive activities such as sprint and middle distance, HIE occurs during a sustained period. On the other hand in sports like soccer, handball and basketball, HIE occurs during short repeated bursts with intermediate periods of low intensity exercise.

Phosphate storage and lactate production rate of a muscle determines the capacity i.e., the amount of ATP that can be produced by the anaerobic process. Metabolic factors can influence HIE performance. Glycolysis is a metabolic process that produces lactic acid (also called lactate) and hydrogen ions in the cells. These hydrogen ions decrease muscle pH creating an acidic state, which leads to fatigue. Removal of hydrogen ions through buffering or efflux would keep the pH stable and protect the muscles against negative effects of lactic acid. Also, removal of lactate by its oxidation would also exert similar effect and would be accompanied by hydrogen ions removal. Both of these techniques will increase muscle’s capacity and anaerobic ATP production.

The mechanism of fatigue is a basic issue of exercise physiology. Fatigue is dependent on internal factors like neuromuscular and central factor and external factors such as duration and type of exercise, and environmental factors. Boosting cellular energy production and attenuating acidic state in the muscles can improve performance during HIE.

During exhaustive exercise, the muscle storage of phosphocreatine (PCr) can be completely diminished for the production of equivalent amount of ATP. Also, the lactate and hydrogen ions generated along with ATP are transported to the extracellular fluid. Thus, the acid load inside cells is decreased enabling further glycolysis (glycolysis is a cellular process by which glucose is broken down to pyruvic acid in presence of plenty of oxygen supply, and to lactic acid when oxygen is scarce). Efflux of lactate, i.e., moving of lactate from inside to outside of cells depends on muscle blood flow, the amount of transport proteins and extracellular buffer capacity and lactate concentration. More lactate efflux will lead to an enhanced ATP production. Anaerobic glycolysis contributes to 74% of total anaerobic ATP production during cycling (at VO2max) while the remaining percentage of required ATP is filled out through PCr depletion. Since this anaerobic process is associated with depletion of stored PCr and high lactate levels in muscle and blood, major part of energy requirement during cycling is fulfilled by anaerobic process.

Relative importance of PCr utilization and anaerobic glycolysis towards anaerobic ATP production depends on duration, intensity and type of exercises. The duration and intensity of an exercise determines the amplitude of ATP production through anaerobic glycolysis and PCr depletion. For example, during first 3 seconds of muscle contraction, PCr breakdown leads to 70% of the ATP formation. Then it declines after a few seconds of maximal contraction, and glycolysis takes over the dominant role after 6 seconds. Anaerobic glycolysis dominates during sustained HIE with a duration more than 6 seconds, whereas during short duration and interval exercise PCr fuels the anaerobic ATP production.PCr utilization is associated with a concomitant increase of inorganic phosphate molecules, which shifts the gear of ATP provision from PCr to glycolysis. Alternatively a reduced muscle content of PCr may reduce the maximal rate of PCr breakdown. Therefore a reduction of PCr storage may cause fatigue and reduce anaerobic power.Though PCr is resynthesized rapidly, however removal of lactate from muscles occurs slowly. Thus for interval exercises with short recovery periods, PCr utilization is the major source of ATP production.

If muscle mass is increased by resistance or sprint training, it can improve the total amount of anaerobic ATP production during exercise. Sprint training or resistance training may alter neuromuscular control and attribute to an initial increase in muscle strength. Sprint induced neural adaptation also increases the working muscle mass and anaerobic capacity. Resynthesis of PCr occurs only during aerobic conditions of ATP production, and thus depends on muscle’s oxidation capacity (VO2max). Training protocols that enhance the role of PCr synthesis is expected to improve performance during interval exercise.

It is a common practice to use creatine (Cr) supplements to increase HIE performance. A study showed that dietary supply of Cr increases the muscle control of Cr and PCr. In an average person, Cr supplementation increases total Cr (TCr=Cr+PCr) by 20%, with 10% of the increase pertaining to PCr. However, all subjects do not respond to Cr supplements to the same extent. Subjects with low initial muscle TCr content shows a high response whereas subjects that already have high initial TCr content do not show any effect. Cr loading prior to or during a training period can increase the training load and enhance the training adaptation. Cr loading has also been reported to elevate the rate of force relaxation in human muscles. In exercise like sprints where the fast movements require quick adjustment of muscles between their contraction and relaxation states, a faster relaxation will definitely be an advantage.

Many studies followed a 20 gram/day of Cr monohydrate loading phase for 5-7 days, where the substance is dissolved in water and is distributed in 5 gram doses in order to reach sufficient high levels in blood Cr concentration. The muscle uptake of Cr is highest during this loading phase. The loading regime is followed by a period of lower dose of Cr, i.e., 2-3 gram/day. High doses of Cr after the loading phase are not useful since the excess Cr is excreted in the urine. Exercise may increase muscle uptake of Cr, which presumably happens by increased muscle blood flow and thereby exposure of the exercising muscle to elevated plasma Cr. It should be noted that muscle Cr uptake is influenced by the insulin hormone. Exercise induces the insulin hormone production; in other words exercise induces more exposure of muscles to insulin. Therefore it is recommended to combine Cr intake with a substantial amount of carbohydrate intake and exercise.

Major side effects such abdominal pain and diarrhea experienced by many users has limited the use of bicarbonate as an ergogenic aid. These problems could be minimized by dividing a dose into several smaller doses with plenty of water intake or if the supplement is co-ingested with food. To reduce the gastrointestinal stress, it is recommended to take the bicarbonate supplement over a few days prior to a competition rather than taking it just few hours before. The ergogenic effect of bicarbonate can last up to 2 days after the last dose.

Some studies indicate that beta-alanine (a type of amino acid that serves as a building block of protein) is a promising ingredient for ergogenic aid during HIE. Beta-alanine along with another building block of protein called histidine forms Carnosine. Carnosine is an important buffer in skeletal muscle. Intake of beta-alanine promotes carnosine formation and increases muscle carnosine concentration. Carnosine concentration is double in fast twitch muscle fibers than its amount in slow twitch fibers. Sprinters, rowers, and body builders develop higher concentrations of carnosine in their bodies which presumably happens because of the fiber type difference. Similarly, the high carnosine concentration and buffer capacity observed in sprinters than in marathoners may be a result of the high volume of fast twitch muscle fibers.

Nutrition and the brain