Minerals! What exactly are they? 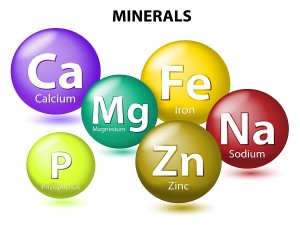 Well, they’re inorganic nutrients that all organisms, humans, plants and animals need to function. Humans need them in amounts but it depends on the actual mineral how much they need exactly. In humans, minerals are needed for different things such as maintaining strong teeth and bones and controlling body fluids inside and out of cells. It is said that the human body contains about 19 minerals but in different amounts, however only 4-6% of our total body weight is made of minerals. They are vital and they are required to make sure various important processes can take place in the body. Generally, minerals have a prominent role in the health and disease of humans and the deficiency of some certain minerals, such as iron, can have unhealthy affects. There are two groups that minerals are divided into, micro (trace) elements, which includes iron, potassium, magnesium, iodine, zinc and macro (major) elements which includes calcium, phosphorus and sodium.1,2,3

Minerals have all sorts of functions and make various contributions to our body:

Iron is one mineral that is needed for the normal functioning of red blood cells. Red blood cells are involved in the transportation of oxygen throughout the body and they contain an oxygen-carrying pigment called Haemoglobin. Iron is usually found inside this pigment and is needed to ensure that the red blood cell is able to do its job. Iron is also a vital component of enzymes used in cellular respiration and is also needed for the myelination and protection of certain parts of the nervous system. Myelination is when a substance called myelin sheath surrounds certain nerve cells; this substance insulates the nerve cell and promotes its electrical transmission. Iron also has a part in the uptake and degradation of neurotransmitters and their synthesis and packaging.1,4,5

Iron is naturally found in some foods, added to others and is also available as a dietary supplement Iron found in food is subdivided into two groups, ‘haem-iron’ which comes from animal foods and ‘non-haem iron’ which is found in vegetable foods.. Good sources of iron are liver, red meat, poultry, lentils, wholemeal bread, cereals, eggs, some types of fish, nuts, beans, rice and raisins.6

If an individual isn’t getting enough iron in their diet it could result in their blood not being able to transport enough oxygen around the body, which can lead to ‘iron deficiency anaemia.’ Women are more likely to suffer from anaemia caused by lack of iron because they are losing a lot of blood during menstruation.6,7

Phosphorus helps form healthy bones and teeth and aids the body in making energy. It makes up every cell membrane in the body and it is vital in ensuring that every cell in the body functions properly. It usually partners with calcium to form a substance that helps keep our skeleton strong. Along with these functions phosphorus is also needed to form a substance that helps transporting fat in the blood and to make coenzymes vital in metabolism. Phosphorus is also an important component needed to make genetic material, our DNA. Phosphorus is found in nearly all foods and is also added to some foods. A good source for phosphorus includes dairy foods like milk, fish, egg, certain cereals or poultry.1,2,6,7,8

Sodium is ever present in our diet of course and is found in pretty much everything we eat. Now sodium is important because it has a few functions with the body. Firstly it helps regulate the balance of extracellular and intracellular fluids, potassium is also another mineral that helps do this. Secondly it has a hand in regulating the acid-alkaline balance within fluids of the body, sodium usually makes fluids more alkaline where chloride makes them more acidic. The two work together in order to maintain the acid-alanine balance. A further role of sodium is to help in the transport of messages in the nervous system through nerves cells and to aid contraction of muscles.

An obvious source of sodium is of course table salt, which is actually just sodium chloride and it is the main source of sodium in our diet. One teaspoon of salt gives you nearly 2000mg of sodium. Sodium can also be found in milk, poultry, egg white, green leafy vegetables like spinach.1,2,9

Potassium helps with the functioning of the nervous system, heart and muscles and like other minerals it also helps maintain fluid balance in the body and it’s tissues. In terms of the heart and muscles, potassium aids the transmission of messages that lead to the contraction of muscle tissue. Good sources of potassium include fish, poultry, meat, vegetables (particularly green leafy vegetable), bananas, tomatoes, carrots and whole grain cereals.2

Magnesium steadies the heart rhythm, helps nerves and muscles function and keeps bones strong. It also aids the body in creating energy and making proteins. In addition to this magnesium is a vital factor in nearly over 300 enzyme systems furthermore it is needed for the generation of both aerobic and aerobic energy and for glycolysis.1,3

Calcium is needed to build bones and maintain normal function of muscles and nerves.1

Copper is another mineral that is important for blood and nervous system, formation and growth of bone and myelin sheaths of nerves. It also has a role in securing iron into haemoglobin promoting iron absorption in the digestive system.1

Iodine makes up important thyroid hormones that are released by the thyroid gland. These hormones are involved in various functions such as metabolism and temperature. Iodine the mineral itself can be found in fish and dairy products, seaweed in particular contains a lot of the mineral. 1,10,2,

Zinc, like some other minerals, makes up certain enzymes throughout the body that are involved in vital processes including DNA and RNA polymerase. Zinc is involved in processes such as cell replication, DNA synthesis, gene expression in nucleic acid and needed for the functioning of taste buds. It is also needed for wound healing and tissue repair and has role in the immune system, digestion and protein synthesis. Food like Oysters contain a lot of Zinc but other foods such as poultry, nuts, beans, dairy products and red meat are also good sources. 1,4,11,12,13

By Dr. Vaishali Kulkarni Introduction: Everything there is to know about Vitamin B5 (Pantothenic acid…

One Response to "Minerals! What exactly are they?"