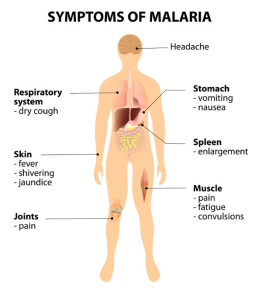 Despite decades of efforts to combat malaria, it remains one of the leading causes of death worldwide and no effective vaccine exists currently. According to UNICEF, malaria kills one child per minute and mostly affects children in Africa, where 90% of all deaths due to malaria occur. In this article, we will focus on the most virulent human malaria parasite, Plasmodium falciparum, how it is transmitted, its parasite cycle, prevalence of malaria, signs of symptoms of malaria, efforts to combat malaria, and some common medications.

Malaria is a mosquito-borne infectious disease in human and other animals. Most commonly, it is transmitted by inflected female mosquitos in the Anopheles genus (or biological class). Five different malaria parasites cause malaria in human – P. falciparum, P. malariae, P. ovale, P. vivax, and P. knowlesi with the majority of malaria-related deaths caused by P. falciparum, and cause symptoms that can range from less severe to very severe. Typically, less severe symptoms include fever, headache, and fatigue. Severe symptoms, on the other hand, include seizure, coma, or even death. Having mentioned that, in many cases, there may not be any symptoms at all in the infected person. Despite that, however, transmission of malaria can still occur from an infected person that does not show any symptoms [1].

Malaria can usually be diagnosed by examining a person’s blood under the microscope as each of the major parasite species displays distinct characteristics [2]. Prompt diagnostic testing is important for effective treatment against malaria.

Malaria is widespread in tropical and subtropical regions around the equator including Asia, Latin America, and Sub-Saharan Africa [2]. It is also associated with poverty and has a great negative impact on the economy. In 2013, the World Health Organization (WHO) reported 198 million cases of malaria worldwide, 584000 to 855000 deaths caused by malaria, with most cases found in Africa.

The life cycle of P. falciparum is extremely complex, and there are two phases to malaria infection – the first stage involving the liver and the second stage involving red blood cells. The parasite cycle commonly starts with a mosquito bite that introduces the parasite from the mosquito’s saliva into the skin and then into the bloodstream of the bitten person. The parasite subsequently travels to the person’s liver where it infects liver cells, matures, differentiates and asexually reproduces over a period of about 7 days, producing differentiated organisms called merozoites. Following infection of liver cells and reproduction, the new infective merozoites can escape into the bloodstream and infect red blood cells, beginning the second stage of the parasite cycle. Within the human host, the asexual reproduction in red blood cells is responsible for the clinical symptoms observed in cases of malaria [3].

While some merozoites begin the whole cycle again, infecting and reproducing in more red blood cells, some merozoites enter the bone marrow and over 8 to 10 days, develop into precursors of male and female cell waiting to be fertilized [3]. At this stage, these cells, also called gametocytes, are non-replicating and can cause further infection by developing in a mosquito vector. This takes place when a fertilized female mosquito bites the infected person and takes up the gametocytes in the blood, following which the fused male and female gametocytes fuse to form an ookinete [3]. It then develops into new sporozoites, which then migrate into the mosquitos’ salivary glands. When the infected mosquito bites a new vertebrate host, the parasite cycle begins again [3].

The first symptoms of malaria are rather non-specific and resemble those of a minor viral illness. They usually appear after 8 to 25 days following initial infection, and may appear even later in people who have taken preventative medications. The classic symptoms of malaria include headache, fatigue, abdominal discomfort, muscle/joint pains, and can be followed by coldness, shivering, fever, and sweating. Infection with P. falciparum can lead to recurring fever every 36 to 48 hours, or a continuous but less severe fever. With prompt and effective anti-malarial treatment at this early stage, full recovery from infection is expected.

In cases of severe P. falciparum malaria where there is ineffective medicines or delayed treatment, there may be respiratory complications in as much as 25% of adults and 40% of children, which can lead to pulmonary oedema (fluid accumulation in the lungs). Other severe symptoms include coma, acute renal failure and excess acid production in the body [2].

Global efforts to control and eliminate malaria have progressed significantly both globally and in Africa, where malaria is the most prevalent. According to the “World malaria report 2013” published by the WHO, increased political commitment to fight against malaria through increased funding have helped reduce incidence of malaria by 29% globally and 31% in Africa.

Currently, malaria case management calls for early diagnosis and prompt (24 to 48 hours after onset of symptoms) effective treatment. In terms of diagnostic testing, the proportion of people suspected to be infected that have received proper diagnostic testing in the pubic sector have dramatically increased globally. Efforts to lower the risk of malaria include using mosquito nets, insect repellents, and insecticides. There are also medications that travellers can take to prevent malaria. With that said, as there is widespread drug resistance, there is continuing effort to limit the unnecessary use of anti-malarial agents, so that only those who are truly infected would be administered anti-malarial agents. For those who are being treated, compliance and adherence to the full-term treatment must be promoted.

Despite significant improvement in the advances in medications and increased access to diagnostic testing globally, there is still a lack of proper testing and treatment options in countries with weak health systems. In addition, emerging parasites that are resistant to certain anti-malarial agents are threatening the progress to combat malaria. Therefore, adequate funding is particularly important for the advent of more innovative technologies, medicines, as well as strategies to accelerate the fight against malaria in the years and decades to come.

Currently, there are no effective vaccines against malaria. However, for travellers visiting areas where malaria is common, there are available medications to prevent the disease. Combination therapy using more than one effective anti-malarial medicine is also used to prevent or delay resistance. This section will outline some of the current and common anti-malarial drugs that are used to treat or prevent malaria.

Artemisinin – This is a group of drugs that has the most rapid onset of actions against P. falciparum malaria, and is usually taken in combination with other anti-malarial agents such as naphthoquine [4]. The use of this drug on its own is highly discouraged by the WHO because there is resistance to this drug. At doses that treat malaria, this drug is well tolerated but there are, nonetheless, side effects associated with the use of artemisinins – nausea, vomiting, anorexia, minor blood abnormalities and dizziness.

Chloroquine – Used to treat or prevent malaria, chloroquine is less frequently used due to widespread presence of of chloroquine-resistant P. falciparum strains worldwide. As a result, this drug may be used in combination with proguanil (see below). Overdose of chloroquine may cause accumulation of the drug, which can lead to blurred vision and blindness. Other side effects associated with the use of this drug include gastrointestinal abnormalities, itching, head rush, and nightmares. Serious side effects include eye toxicity and cardiac toxicity [5]. Long-term use of this drug can lead to mood changes as well.

Proguanil – Marketed as Paludrine by AstraZeneca, this drug is usually taken in combination with other anti-malarial drugs such as chloroquine and atovaquone. Taking this drug over a longer period of time (several months) may lead to mood changes including anxiety.

Mefloquine – This is an orally administered anti-malarial drug that is used to prevent and treat malaria [6], and is a preferred drug of choice compared to chloroquine. However, mefloquine is not effective in eliminating the parasites in the liver, so other drugs should be used for that purpose. There are some severe side effects associated with the use of mefloquine – neuropsychiatric side effects [7] including dizziness, anxiety, depression, and hallucinations; cardiac side effects including abnormal heart rhythms. For pregnant women taking this drug, no increased risk for birth defects or miscarriages was reported [8].

Atovaquone/proguanil – These two components make up the drug Malarone and are commercially provided by GlaxoSmithKline. Though it is not used to treat severe malaria typically, Malarone is used for both treatment and prevention of malaria [9]. There are fewer adverse side effects with the use of Malarone compared to other anti-malarial drugs, but still include coughing, diarrhoea, headache, nausea, stomach ache, vomiting, weakness, mouth sores and loss of appetite.

Lumefantrine/artemether – This anti-malarial combination of drugs is used for treatment of malaria by killing the parasites. However, they are not used for prevention. Side effects associated with lumefantrine and artemether may include dizziness, weakness, headache, muscle/join pain, vomiting, loss of appetite, fever and chills. More severe side effects may include abnormal heartbeat, fainting, breathing/swallowing difficulties, hoarseness, rash/hives and speech difficulty.

Sulfadoxine/pyrimethamine – These two drugs in combination is used to prevent and treat malaria when other medicines such as chloroquine is not effective [10]. They work by killing the parasite. Taking sulfadoxine and pyrimethamine may cause drowsiness, and prolonged usage may cause severe renal or liver failure as well as anemia.

Doxycycline – Usually, this drug is used to fight bacterial infections, but some forms of doxycycline have been used to prevent malaria. However, doxycycline should not be used for the initial treatment against malaria. Side effects associated with doxycycline may include diarrhoea, fever, body aches, abnormal vision, chest pain, irregular heartbeat, shortness of breath, confusion, dizziness, nausea, vomiting, rapid weight gain, ringing in the ears, skin rashes and vaginal itching.

Quinine – This anti-malarial drug is used to treat malaria but is associated with many adverse effects including ringing of the ears, sweaty skin, blurred vision, rashes, impaired hearing, confusion, headache, abdominal pain, nausea, vomiting, and diarrhoea. A large dose of quinine may even lead to severe side effects including deafness, blindness, serious allergic reactions, cardiotoxicity [5], abnormal haemoglobin in the blood and renal failure. Due to the associated side effects, quinine is now commonly replaced by other medicines to treat malaria.

What are BCAAs? BCAA stands for Branched Chain Amino Acids because of their chemical structure…

This was my first session with Nepris, that covered basics of Genetics, Mendel’s Experiments…

One Response to "Malaria"