Coronavirus, Anti-Vaxers, Misinformation…Are We Ever Going to Learn?

I would like to address the recent pandemic outbreak of COVID-19 from a different perspective. The pressing question I want everyone to think about is: Did we learn anything from history?

It’s said that history repeats itself. Looking at past 20+ years of several zoonotic viral outbreaks, it seems humans force history to be repeated. Zoonotic diseases are infectious diseases spread from animals (usually vertebrates) to humans and can be caused by bacteria, viruses, parasites or fungi. Animals that seem healthy can actually be carriers of deadly diseases that can jump to humans.

According to the World Health Organization (WHO), viral diseases continue to emerge and represent a serious public health concern. In the last twenty years to a timeline that reaches the present day, an epidemic of cases has been reported:

is the most recent of zoonotic viruses to come to existence and has become pandemic within the last few weeks. Recent comprehensive sequence analysis and comparison shows snake to be the host of COVID-19. This means that the COVID-19 came from consumption of snake blood, meat raw or undercooked. In comparison to SARS and MERS, COVID-19 is likely more highly transmissible but not as deadly.

We need to take a moment to think and ask ourselves “How did this happen? How did we end up in this mess?”

Most probable answer is we did this to ourselves because society has continuously ignored the warnings and advice from experts.

All of these zoonotic viruses have spread to humans from the consumption of wild animals and have taken a toll on humanity. We constantly refuse to listen to the experts like CDC, WHO, and specialists like immunologists. They have warned over and over again to not consume wild animals (or at least to not eat undercooked or raw meat). We don’t know what the wildlife may have eaten, what they have been in contact with, or what diseases they may carry.

Yet, after seeing the harm these viruses can cause, we still risk our lives everyday by continued consumption of wildlife (snakes, wild birds, bats, etc.). Even consuming products of wild animals is dangerous; yet, people still drink snake blood (considered very healthy), raw camel milk and urine.

If we had learned anything from SARS and laid emphasis on the warnings of the experts, perhaps we wouldn’t have been exposed to more zoonotic viruses, let alone to be in this real scary moment of pandemic COVID-19. This is a very real threat to humanity. It is not some ploy by the government, news, or big pharma to make more money or do population control. Until today there are no known antivirals or vaccines against SARS, MERS, and of course the new COVID-19. Amazingly, we fail to realize the gravity of the situation.

Same holds true of Anti-Vaccination population. Apparently, they don’t comprehend the seriousness of playing around with viruses i.e. refusing to listen to the experts, rejecting vaccination, thus have brought once eradicated diseases like measles, whooping cough, mumps and even the long lost bacteria causing cholera to the first world like United States, placing the whole society at risk. No harm might be seen in a day, months or even years but it only takes one event and something like the recent viral outbreak can happen, and we have nothing to protect us from the outbreak.

I would like to take this opportunity to address the misinformed anti-vaccination population. As I explained above, we have no defenses against most of the viral outbreaks, especially COVID-19. They and their families are in the same danger as the rest of the population right now, rather we all are at the mercy of the virus.

The anti-vaxxers need to understand that in a way viruses are very clever. Not only they mutate at such a fast rate to adapt to the species, they are capable of transmitting themselves from person to person. As we can see from SARS, the virus lived in bat, any animals who ate the bat droppings got infected (i.e. the virus flourished in those animals), and humans ate bats, so they got infected.

Here is the cliché: not only that virus quickly adapted to live in humans but mutated to be able to infect human to human. They strictly follow the rule Survival of the Fittest. Better example of dangers of viral diseases is of COVID 19. This virus lives in a cold-blooded animal like snake. It is impressive that it adapted to live-in warm-blooded humans. Once again not just live in the humans, take us hostage from inside and kill us but spread itself from human to human.

Why is a Virus so scary?

Viruses depend on the host cells that they infect to reproduce. When found outside of host cells, they are inert i.e. just existing. They only carry DNA or RNA that is packaged in a protein or membranous coat, which means they lack machinery for survival on their own.

As shown in the figure below both membrane and protein coat of influenza virus is visible in an electron micrograph, just existing outside the cell. They are so tiny in size, one billionth of a meter.

When a virus comes into contact with a host cell, it inserts its genetic material into its host, literally taking over the host’s functions. In a way it holds the cell hostage. They force the cells to produce what they want, i.e. an infected cell starts producing more of the viral protein and DNA/RNA instead of its usual products.

Some viruses can stay dormant in their host cells for very long time, causing no harm or changes. But once they are stimulated they enter a phase called lytic phase. This means they make new viruses, assemble themselves, and burst out of the host cell, killing the cell and move on to infect more cells.

Bacteria can be killed with antibiotics (I’ll come back to the story of differences between bacteria and viruses, and antibiotic resistance in another post). However, we have no defenses against new viruses especially the novel coronavirus. The only defenses we have are against the once eradicated diseases that too because of the  vaccines that were developed painstakingly over decades to save lives. Once again most of the scientists all over the world are working hard to make a vaccine or antiviral against the COVID-19.

But why do we keep repeating this?

As I mentioned above the once eradicated diseases that us humans have brought back, they could mutate any minute then even the vaccinated population will be at risk. So, why not listen to experts and prevent harm from happening to yourself and your children and the entire world. I do hope we learn at least from this outbreak and listen to experts (cannot stress enough) when they say how to be safe from a particular disease especially viral disease. 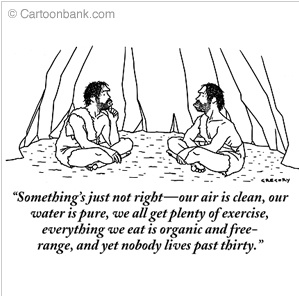 When we could be enjoying the fruits of labor of our ancestors (i.e. scientific progress in agriculture, medicines, vaccines and so forth), we decided they knew nothing and we would like to live like the paleolithic people.

Why? I agree Paleolithic people might have had clean water (if they found it) and clean air definitely. But they lived only upto most 35 years of age.

Misinformation and inability to listen to the experts not only keeps bringing more zoonotic viruses but  has created polarized views of the current viral outbreak. People either think the world is going to end and are stockpiling toilet paper or they think it’s nothing more than a cold. Both views are wrong, and once again both sides risk lives.

People who are stockpiling on gloves, masks, antiseptics (futile against virus), daily necessities have created a panic in the society. They have caused a lack of necessary medical supplies for the hospitals and people in general. They are forgetting that amidst such a panic, people getting ill with any other ailment like heart attack won’t be able to access hospital services.

At the other end of spectrum is the population that thinks there is no risk to them because they are healthy and this viral outbreak is nothing more than a common cold. This is wishful thinking and they are risk to the society because they refuse to take necessary precautions and will be responsible for transmitting and spreading the disease.

It is amazing to see that despite such a grave situation that the entire world is facing at the moment, there are people still spreading misinformation and trying to take advantage of the vulnerable population (or the people who just follow the herd). So many of the ‘all natural products’ to boost immunity, sprays and foods that can kill the virus are being sold.

At the same time there are others who are trying to steal people’s information.  According to the Department of Health and Human Services, a malicious website pretending to be a coronavirus live-tracking map from John Hopkins is circulating the internet with the ability to steal personal information and sensitive data.

Instead it is imperative to think of everyone as one and call for a global action to deal with this public health emergency. We all have a hard task at hand especially CDC and WHO, and they need our cooperation.

Our major goal right now should be to learn from previous mistakes, get real scientific information and break the transmission chain of COVID-19. We all need to be aware of the fact that the present viruses can mutate and cause more destruction. Therefore, our objective should be to try to prevent more zoonotic viruses crossing species to infect human population in future.

Being stuck on a belief is not helping anyone. Science is about facts not beliefs. We can keep believing things like: we are resistant to coronavirus or vaccination is some conspiracy from government and big pharma, that does not alter the facts. Beliefs change with time, people, thinking but FACTS remain same, no matter what.

Hopefully, we will all learn this time and not think only of ourselves but of entire humanity as one. Believe it or not we are all connected, we are all dependent on each other and one person’s mistake could risk lives of the rest of the population.

So, as I always say, “think critically, stay healthy.”

Loss of Sense of Smell in COVID-19: Raising Awareness

Recently, a new symptom of COVID-19 has been identified in young adults who are…

Essential Oils: A Panacea for Opiate Crisis in the US?