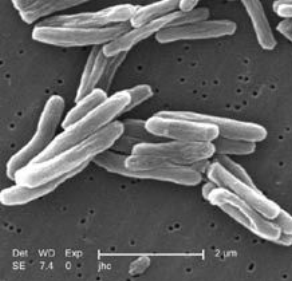 Tuberculosis, or TB, is an infectious disease caused by the bacterium Mycobacterium tuberculosis [1,2]. It typically affects the lungs, and in this case it is called pulmonary TB. Sometimes, other parts of the body can be infected; these include the brain and nerves, lymph nodes, bones and joints, digestive system, bladder and kidneys, and the reproductive system. Such a case would be known as extrapulmonary TB.

Pulmonary TB can lead to tissue destruction and formation of small cavities. Upon healing, these cavities are replaced by scars. TB is a serious condition that can be fatal; however, it can reassuringly be cured with appropriate treatment.

How does Tuberculosis spread?

TB is contagious, meaning it can be caught from other people. It often spreads by inhaling droplets from the coughs or sneezes of infected individuals. Nevertheless, it’s important to note that it will only spread upon prolonged exposure to such persons

A healthy immune system is normally capable of destroying TB bacteria. If the immune system is compromised, it will not be able to kill the causative bacteria but only prevent it from further dissemination within the body.  In this case, the affected individual is said to have latent TB. There will be no evident signs or symptoms, but the bacteria remain in the body.

Active TB occurs when the immune system is too weak to kill the bacteria; it will spread throughout the body and symptoms will appear within a few weeks or months.

What are the symptoms of Tuberculosis?

It depends on the site of infection [1,2]. If TB infects the lungs, symptoms will include:

If TB infects other organs in the body, the following symptoms are expected:

What are the risk factors of Tuberculosis?

Several factors can make people more prone to TB infections [1,2], such as:

How is Tuberculosis diagnosed?

TB diagnosis is challenging as several tests are often required [1,2].

For active pulmonary TB, a chest X-ray will be performed to detect any changes in the lungs that are indicative of TB. Samples of phlegm will also be examined to check for TB bacteria.

Diagnosing active extrapulmonary TB will involve a CT scan, MRI scan, or an ultrasound scan of the affected organ. Urine and blood tests are also run, in addition to a biopsy of the infected tissue to test for the presence of TB bacteria. In some cases, a small sample of the cerebrospinal fluid is taken through a lumbar puncture to determine whether the brain and spinal cord are infected by TB bacteria.

The Mantoux test, also known as the tuberculin skin test, is commonly used for latent TB. PPD tuberculin is injected into the skin of the forearm; if the tested person has latent TB, a solid red bump will rise at the site of infection within 48 – 72 hours.

Sometimes, a minimal skin reaction to the Mantoux test can develop in people who previously received the Bacillus Calmette-Guerin (BCG) vaccination. This should not be confused with a diagnosis of latent TB infection.

A more recent blood test, known as the Interferon Gamma Release Assay (IGRA), can be used to help diagnose latent TB in those who have had a positive Mantoux test to rule out a false – positive result due to previous BCG vaccination [1].

Can TB be prevented?

The BCG vaccine is the only available preventive measure against TB infection since 2011 [6], with more than 90% of children being vaccinated globally [7].

How is Tuberculosis treated?

Treatment is time – consuming and difficult due to the unusual nature of mycobacteria that makes many antibiotics ineffective [8]. A course of antibiotics that will take several months to complete should ensure effective treatment. Hospitalization during such treatment is not required for most patients [1].

As of 2010, active pulmonary TB is managed with a combination of antibiotics over a period of six months [1,7]. The combination comprises of:

A patient’s overall health will determine how long it’ll take them to start feeling better. This could be anywhere between a few weeks and several months. It’s of utmost importance that the patient continues to take the antibiotics exactly as prescribed and to finish the whole course.

Treatment is similar to that of active pulmonary TB; only the duration may extend to 12 months in total. A corticosteroid may be prescribed additionally to reduce swelling in affected areas [1].

A combination of rifampicin and isoniazid for three months, or monotherapy with isoniazid for six months is the standard treatment for latent TB [1].

To ensure that the benefits of treatment outweigh the risks, the following patient groups are advised to undergo treatment:

What are the side effects of TB treatment?

How much of a problem is Tuberculosis nowadays?

After HIV/AIDS, TB is considered the second – most common cause of death from infectious disease [8]. In 1993,

TB was announced to be a “global health emergency” by the World Health Organization [7]. A Global Plan to Stop TB was developed in 2006 by the Stop TB Partnership, which aimed to save 14 million lives by 2015 [9].

However, the rise of HIV – associated TB and multiple drug – resistant (MDR) TB make these targets a challenge to achieve.

According to the 2014 World Health Organization Global Tuberculosis Report [10], 1.5 million people died from TB in 2013. In addition, 5.7 million new cases were reported to relevant TB programs in the same year, indicating that the burden of TB is actually larger than previously estimated.

On the bright side, quality TB diagnosis and treatment were able to reduce mortality rate by 45% since 1990 and save 37 million lives between 2000 and 2013.

Unfortunately, TB research and development is underfunded. Furthermore, a US $2 billion annual funding gap for
TB control activities exists. This calls for stronger global response and impact in order to relieve the burden of this worldwide killer.

Sleep: It’s Good for Your Health

By Joanne P. Shelby-Klein BSN RN Sleep, some of us think we don’t…

Creatine monohydrate – a study on its benefits. When is it best to consume: pre or post workout?