Are GMO’s Good for You: The Truth About Genetically Modified Organisms

Learn the Never Told Details about GMOs Ever Before. Empower Yourself with Knowledge and Become an Expert on GMOs. This analysis is part of our latest Scientific research on GMOs. These are the real facts, the whole truth and nothing but the truth. 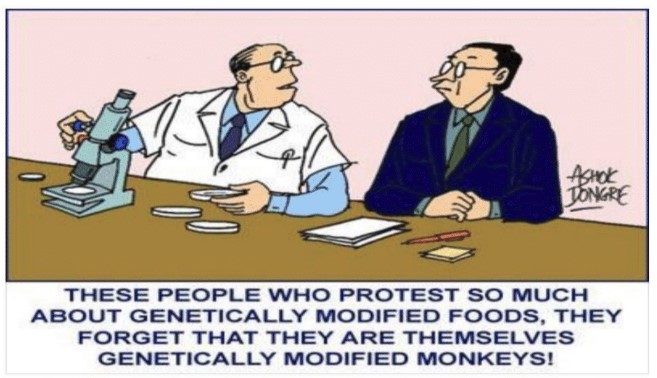 Since the start of civilization, nature has created genetically modified plants and organisms. Every time we reproduce, the offspring is a GMO. We are a GMO as well, from our own parents.

When a gene from one organism is purposely moved to improve or change another organism in a laboratory, the result is a Genetically Modified Organism (GMO). It is also sometimes called “transgenic,” meaning the transfer of Genes. However, the process done in the laboratory is identical to when it happens naturally.

What is the difference?

As a geneticist and advocate for people/patients, I presume that if scientists create a genetic modification, it will always be better than a naturally occurring one, i.e.  in the laboratory, the scientists can control unwanted genes being transferred. This article addresses details about the GMOs, so the consumers are not fearful of the same crop they have been eating for years [2].

To explain GMO’s and hopefully put the matter to rest, we will have to go on a journey to the past: the Paleolithic Era. Hopefully, you will enjoy the ride and learn about GMOs.

The Start of GMOs 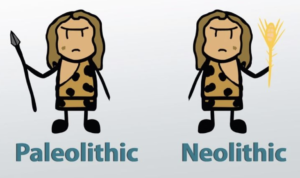 Human advancement from a hunting/nomadic lifestyle (Paleolithic age) to farming (Neolithic age)  initiated the GMO formation/production around the world today. Neolithic farmers were the first ones to domesticate wheat and sheep. They learned to select and cultivate plants with better traits, e.g. sweeter tomatoes, edible lettuce etc. These early farmers could be called the world’s first Genetic Engineers. They are the ones whose hard work has provided us with delicious and thriving fruits and vegetables. Sadly, it is popular to complain about them being harmful to your health because they are Genetically Modified.

The reality is that modern cows, chicken, goats, and sheep are plumper today and genetically much different than their ancestors. Ancient fruits and vegetables (the original, GMO-free) were unpalatable and small in size compared to modern varieties. Ancient tomatoes were the size of berries; potatoes were no bigger than peanuts. Corn was a wild grass, its tooth-cracking kernels borne in clusters as small as pencil erasers. Cucumbers were spiny as sea urchins; lettuce was bitter and prickly. Peas were so starchy and unpalatable that before eating, they had to be roasted like chestnuts and peeled. Carrots were scrawny. Beans were naturally laced with cyanide. 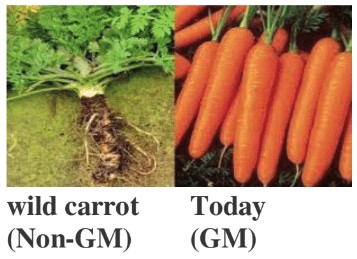 Scientists have been altering genomes of plants for centuries with a process called “selective breeding,” which is a natural way of making a genetically modified plant by cross-pollinating an inferior plant with another plant that carries the desired traits. Wheat was the first crop to be domesticated over 10,000 years ago. Since then it has been a human engineered plant, and cannot exist outside farms because its seeds don’t scatter. 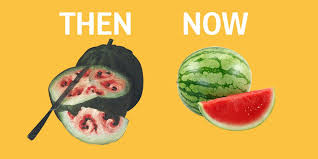 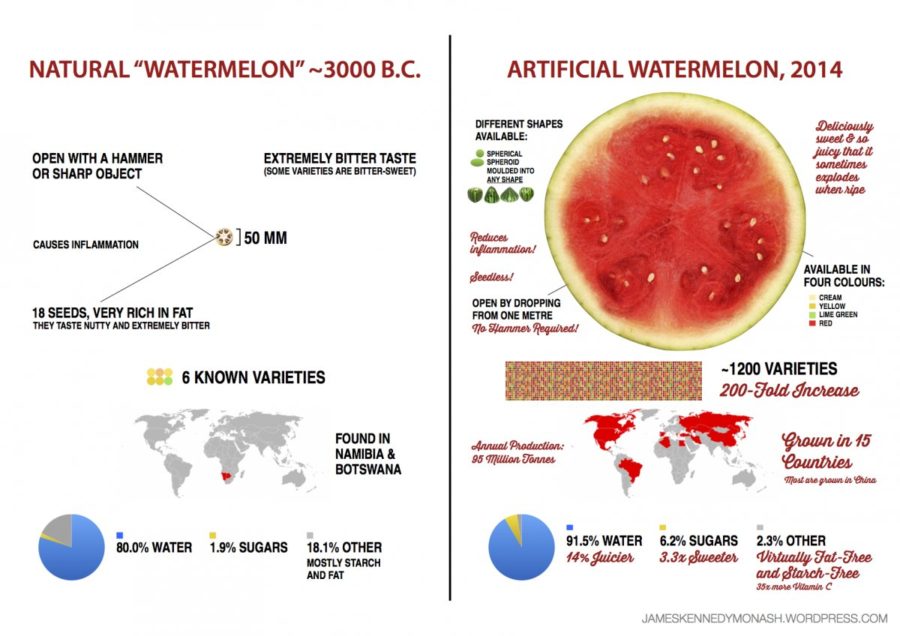 Wheat and Corn have become staples of the human diet. Compare modern wheat and corn in the 21st century (after “GMO”) and how they were nearly inedible originally. 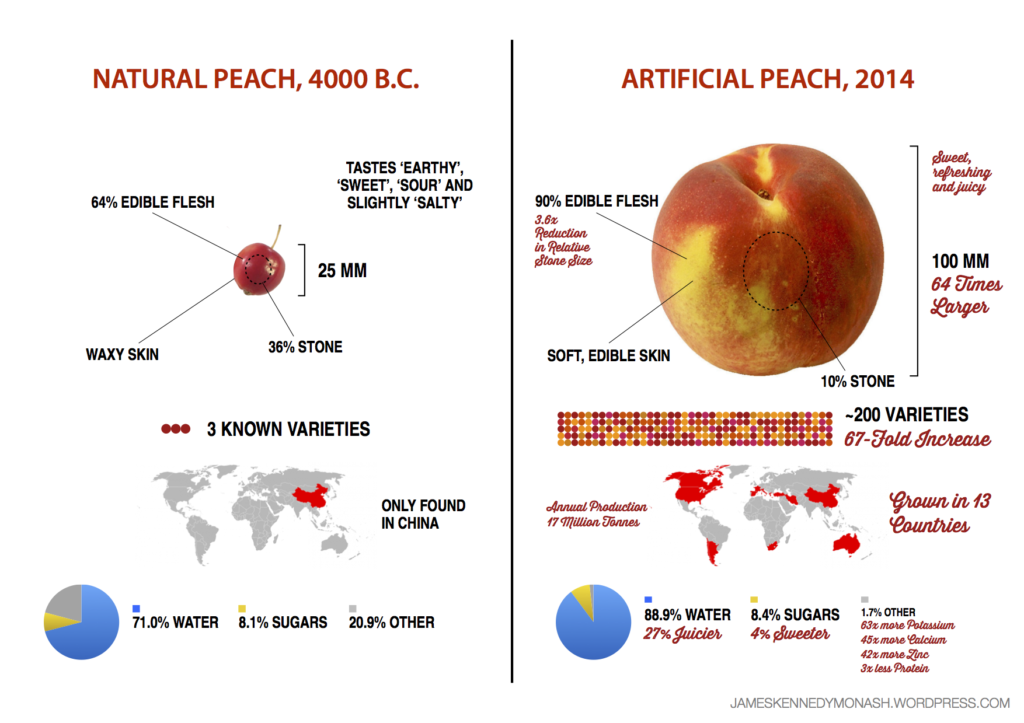 The earliest variety of corn was called “Teosinto,” which was wild corn before it was domesticated. It was only 4″ long (For details on history of wheat, read our article on Wheat: From Paleolithic to Modern Wheat). 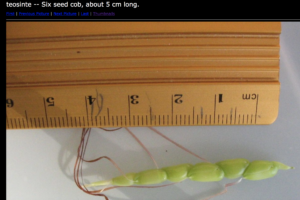 My point from the above pictures and details is that the ‘Original or Natural or Non-GMO Food” was mostly unpalatable. Scientists have used genetic modification (also known as “mutagenic”) techniques for over 60 years to create strains of wheat, rice, peanuts, pears etc. that have become part of our everyday food. Human beings have been consuming a variety of genetically modified produce for centuries without an adverse effect on our health, says Dr. R. Goldberg from UCLA, who is an authority on this subject.

Secondly, there is no way that eating plants can incorporate the genes/DNA of the plant into the human genome.  This is because no genetic material ever has been found that could survive a trip through the human digestive system and into the cells.  If integrating genes into humans was this easy, we would have cured horrible diseases like Alzheimer’s, Parkinson’s, Huntington’s etc. by just giving the good gene to patients in their food or drink (by eating or drinking it); this is not how genes integrate.

We are routinely exposed to viruses and bacteria, and we even consume them.

For example, the bacterium “Bacillus thuringiensis” (Bt) is commonly used as a pesticide in organic farming because it produces proteins fatal to insects. It is classified as a “Natural Pesticide” and is used as a biopesticide worldwide [3]. Humans consume it regularly without adverse health effects (To read more on this bacteria as a biopesticide, read our post on Bt).

Genetic Engineering vs. Selective Breeding: which is better

The argument is that natural selective breeding is acceptable but not the genetic modification done in a laboratory. This ‘myth’ or belief of people is far from the truth. In traditional/Selective breeding, plants exchange unregulated chunks of their genomes. Sometimes, these unwanted traits could be unsafe.

A great example is varieties of potatoes made by conventional (selective) breeding. These varieties inadvertently produced excessive levels of naturally occurring glycol-alkaloids. These “Natural” alkaloids cause gastrointestinal, circulatory, neurological and dermatological problems associated with alkaloid poisoning.

With GMO production in the lab, the scientists can prevent such mishaps. They can insert the required gene at the exact spot and even know the activities of surrounding genes.

Lastly, it takes a long time to get the desired plant by selective breeding as these plants have to be bred for numerous generations to produce the desired trait.

Norman Borlaug led a set of research and development of Technology Transfer Initiatives between 1930-1960. This involved in the development of high yielding varieties of cereal grains, expansion of irrigation infrastructure, modernization of agricultural techniques, and distribution of Hybridized Seeds (GMO seeds), Synthetic Fertilizers and Pesticides to farmers. This saved billions of people from starvation. Therefore, Norman Borlaug was called the ‘Father of Green Revolution’, and finally he received the Noble Prize in 1970.

This tells us the importance of GMOs, Fertilizers, and Pesticides, what scientists had to do to provide enough food for the entire population and condemning all these modern agricultural practices without understanding could bring the world back to the brink of starvation.Not to mention, it could bring us back to the Paleolithic Era with Real Paleo Diet, that includes All Natural Raw Water, Clean Air, but a very hard lifestyle and a life that revolves only around finding food to survive. Despite all the Natural lifestyle of the Paleo People, their average lifespan was only about 30 years.

What is Cisgenesis and Transgenesis: Acceptance of GMOs in Europe

These are two techniques used to introduce new genes into plant genomes. Cisgenesis uses genes from compatible plants i.e. “natural genes” that are not modified and already present in the species. E.g. Apples, Barley and Potatoes.

In Europe, people accept the Cisgenesis plants but not Transgenesis.

Why are people against GMOs?

It seems that the objections to GMOs start from Politics and not science. Too many people are against large corporations having influence over food supply. Spreading the false information regarding modified foods only makes the masses go against the industrial agriculture. What the people are not paying attention to at this time is that going backward or against all the scientific progress the scientists made over the centuries will hurt the world soon. There will not be enough food supply left.

These, in turn, reduced the prices of meats, eggs, milk, and textiles as the price reductions increased the availability of feed products. He goes to the extent of saying that the impact would have been larger if there was less inhibition of GMO crop and if more countries would adopt the GMO crop.

In summary, according to Science, GMO Foods are safe and we have been eating those for millions of years. The only difference is that before the genetic tools emerged, plants got modified in the environment. The Non-GMO food was unpalatable and hardly supported the Paleolithic Population let alone the population now.

This article also sheds light on the labeling in stores where they say “Non GMO” or “GMO Free” is NOT true. There is NO existing food that is not modified. So, I urge you to look at ALL facts and make decisions in favor of your health based on critical thinking. Just because we think something is or should be healthy, does not make it good for us.

There is a lot of fear mongering going on, on various topics like Pesticides, BRCA gene, Organic foods and so forth. Instead of being misled or taking irreversible drastic measures, we should look at science-based reliable information and then make the best decision possible.

What are BCAAs: Branched Chain AminoAcids Amino acids are building blocks of proteins. There are…

Chemo Brain, Is It Real or Is It Myth?

10 Responses to "Are GMO’s Good for You: The Truth About Genetically Modified Organisms"